The Ibiza Cupra has always been the Polo GTI's more charismatic Spanish cousin, but was it a better hot hatch? 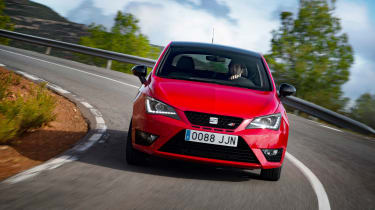 SEAT’s third generation Ibiza was an often overlooked supermini hot hatch that appealed with sharp styling and typically polished VW-sourced drivetrains. Unfortunately, the Ibiza faded into the background thanks to its stirling contemporary rivals, including the brilliant Ford Fiesta ST, Renault Sport Clio and our current favourite, the Peugeot 208 GTi by Peugeot Sport.

Despite being one of SEAT’s core Cupra models, the fourth-generation Ibiza Cupra was to be the last branded as a SEAT, with an all-new model due to be introduced under the Cupra performance brand that SEAT launched late last year.

Initially launched with a 1.4-litre turbocharged and supercharged four cylinder, later in the model’s lifecyle, SEAT (like VW with the mk5 Polo GTI) moved to a larger 1.8-litre engine turbocharged engine that we are driving here. A highly stylised Ibiza Bocanegra special edition was also offered, based on the Cupra’s technical package, but with a striking new look. 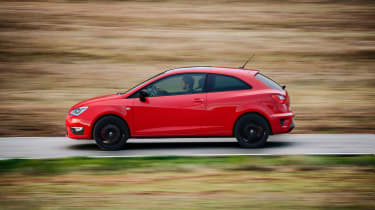 In styling terms the Ibiza Cupra was never as resolved as its Leon big brother though. It looks too tall and too narrow and doesn’t exude the pugnacious character an aggressive hot hatches should. It’s also a shame the two peashooter exhaust tips are so clearly visible within the silver central exit exhaust surround.

As mentioned above this revised model ditched the previous version’s 1.4-litre turbocharged four-cylinder in favour of a more powerful 1.8-litre TSI turbo. It’s the same unit that powers the Polo GTI and is good for 189bhp and a very healthy 236lb ft of torque.

That represents a 12bhp increase over the previous model, but more significantly peak torque has risen by 52lb ft and is now available over a wider rev band – between 1450 and 4200rpm. Despite the increase in power and displacement this new engine is 7kg lighter than the unit it replaces, which contributes to an overall weight gain for the new facelifted model of just a single kilogram.

The 7000rpm rev limit on the tacho is very promising; it’s rare to find a turbo engine that wants to scream its way past 6500rpm. Sadly though, although the engine will rev to 7000rpm, it doesn’t do so with much verve. Beyond 5000rpm, there isn’t much joy in holding onto revs in the Ibiza, the needle slowly rises to an uninspiring soundtrack. Thankfully, most of the performance happens in the mid-range so good progress can be made without high revs.

Whereas the outgoing model was paddle-shift only, this new version is only offered with a six-speed manual gearbox.

The front-wheel drive Ibiza Cupra clocks a 0-62mph time of 6.7 seconds and a top speed of 146mph. SEAT claims 47.1mpg on the combined cycle, an improvement of 3mpg. 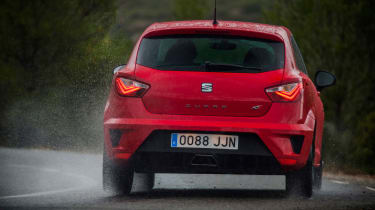 An addition for this model is the Drive Profile feature, which offers Comfort and Sport modes. Sport stiffens the dampers and sharpens the steering. Incidentally, those adjustable dampers were an option on the mk5 Polo GTI but are standard fit here. In line with the Cupra’s sportier image, it gets a slightly more aggressive suspension tune than the Polo GTI.

As before, the new Ibiza Cupra uses an ‘XDS electronic differential lock’. Rather than a mechanical diff, such as the items used by the 208 GTi by Peugeot Sport and the Corsa VXR (with the Performance Package), it’s an electronic system that uses the front brakes to mimic a mechanical unit.

The front brake discs have grown in diameter, up from 288 to 310mm. Like the previous model the Cupra only be available in three-door SC guise. 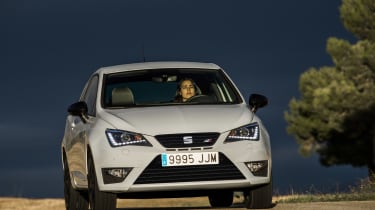 The Cupra comes generously equipped as standard – bi-xenon headlights, climate control, cruise control, auto lights and wipers and a DAB radio are all included. Mobile connectivity is one of SEAT’s key selling points and to that end the Cupra is primed for Apple CarPlay, Android Auto and Mirror Link.

Most supermini hot hatches in this price bracket and with this level of performance and dynamic ability were pretty tiring motorway companions, but this car is refined and comfortable over long journeys.

The Cupra’s cabin quality is very good for the class, it’s relatively basic but feels solid, well put together and made from quality materials. However, the door card plastics are a bit scratchy, but that can be said of almost every car in this sector. The VW Group infotainment unit in the Ibiza is amongst the very best out there.

The seating position is mostly good, although the seat itself is set just a tad too high in its lowest setting. The ride quality in Comfort mode is impressively relaxed and pliant for a small sporting hatchback. But, the sportier setting isn’t too harsh so Comfort is best left for cruising. 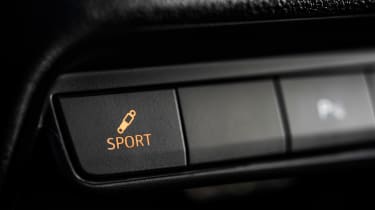 A look at the power and torque curves gives a clear indication of how the engine will perform out on the road; with the power curve leveling off at 4800rpm, as said before, there’s little to be gained from chasing the redline. It pulls with real determination and good response from very low engine speeds – which tallies with peak torque arriving at just 1450rpm – and the mid-range is strong. This is a muscular unit, but feels flat and lifeless at the top end.

The manual gearshift is very slick and precise and the lever itself falls easier to hand than it does in the Polo GTI.

The electrically-assisted steering, a touch spongy and vague in its default setting, improves significantly in Sport mode. It never feels like the sharpest or most detailed of steering racks, though, and the lasting impression is that it’s been tuned to filter out all road noise in normal driving rather than to connect the driver to the front axle in more committed driving.

The dampers stiffen up by around 20 per cent in Sport mode. You can sense more texture in the road surface through the seat compared to Comfort mode and the car does sharpen its responses to steering inputs and tauten its body control. The stiffer dampers also bring an adjustability to the chassis that isn’t exploitable in Comfort. The Ibiza rolls in the corners when in Comfort and feels as tall and as narrow as it looks. But with the dampers stiffened up, the roll is minimized and the Cupra is more willing to rotate. 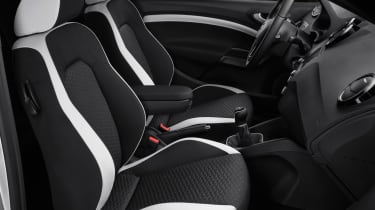 The traction control seems very restrictive when in it’s fully on in the Ibiza’s default mode. The system does however have a Sport setting buried away within a menu in the infotainment screen, but the safety net cannot be removed entirely. With both the dampers and traction control in Sport, the Ibiza Cupra isn’t the most expressive hot hatch but it will react intuitively; the brakes, throttle and steering allowing some on limit adjustability.

The XDS differential does an OK job of trimming out wheelspin and maintaining forward drive. It doesn’t give the same slingshot acceleration away from a bend as a mechanical differential and in slower second gear corners, with the traction control as off as it will go, it can struggle to get all of its power down.

Ultimately though, this chassis isn’t as focused as that of a Fiesta ST or 208 GTi by Peugeot Sport. It’ll squeeze good turn-in and mid-corner grip from its Bridgestone Potenza tyres and maintain reasonably solid control. However, it doesn’t have the hyper-agility in the rear axle or the immediacy at the front end of the very best cars in this class.

The Cupra’s not completely inert, and it has some decent pace, but it doesn’t thrill or excite quite like a Fiesta ST. However, without having driven them back-to-back it does feel like a more engaging hot hatch than the Polo GTI and it’ll also offer stronger value for money. It is a shame, though, that SEAT hasn’t tuned the Cupra’s chassis to be really lively and adjustable, to suit their sportier image. 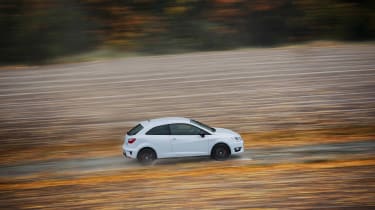 The Fiesta ST and 208 GTi by Peugeot Sport remain the dynamic benchmark for this class, but the Ibiza Cupra countered with a classier interior than either of those rivals.

The Ibiza Cupra was priced slightly lower than the period Polo GTI, but less impressive resale values means this variation is bigger now than when the Cupra was new. The Fiesta ST was the cheaper car new, but thanks to strong demand in the second hand market are more expensive to buy than the Ibiza model for model.