SEAT’s new Ibiza Cupra has the Renaultsport Clio 200 Cup square in its sights. Can our current hot hatch favourite defend its position? Time to find out 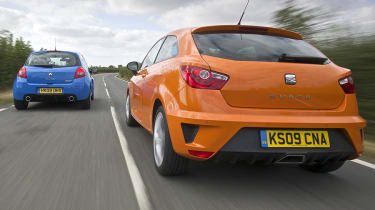 Has SEAT’s market research discovered an emerging generation hankering after a hot hatch that shifts cogs like a car from a console game, or an older group who want a hatch with Ferrari-style paddles, or maybe a new metropolis-based GTI breed who scowl at the prospect of waggling a stick and pumping a third pedal? Whatever the reason, SEAT’s decision to offer the new Ibiza Cupra with just one gearbox – the DSG twin-clutch auto – seems brave.

SEAT has a history of making handy, potent and sharply priced fast hatches, and, despite pandering to transmission fashionistas, the Ibiza Cupra looks great value at £15,995, especially considering that on VWs the seven-speed DSG is a £1000-plus option. The Cupra costs £120 less than the keenly priced Renaultsport Clio 200 Cup, one of our favourite hatches. Question is, will the Cupra’s clever gearbox help or hinder it in its face-off with the Clio Cup? Both, as it transpires.

Renault sticks with the traditional fast hatch recipe for its Clio, with a manual six-speed ’box and naturally aspirated 2-litre engine. By contrast, the SEAT’s motor is as sophisticated as its gearbox, the 1.4-litre TFSI four boasting both a turbo and supercharger, and although it doesn’t quite match the peak power of the Clio (178bhp versus 197), it delivers a heap more torque, and this is the stuff that makes a car feel snap-throttle quick.

I can’t say I’m bowled over by the SEAT’s styling in the metal. Yes, it looks crisp and new but there’s a lot of black hex-pattern intake and vent-work that’s fake, and the Lambo-style trapezoidal tailpipe has a couple of weedy pea-shooters inside. The Renault makes it appear tall and narrow and its wheels and tyres a bit undernourished, though in fact the Cupra’s boots are almost identical: 215/40 R17 versus the Clio’s 215/45 R17s. Inside, neither is trying to set new quality standards for the class.

Piano black fillets here and there and a flat-bottom steering wheel add interest in the SEAT, a yellow-faced tacho and fat-rimmed wheel in the Renault.

The lower-slung Renault feels like the place you’d want to be on a road like this – quick, twisty, well sighted but randomly turbulent – and yet Catchpole, who is in the Clio, has no answer for the Cupra’s pace. At will I can pull away by a car length or two out of every tight corner. The little engine delivers a big punch, there’s strong traction, and each time the tacho needle brushes the red line there’s what feels like an instant gearshift, the flow of power and acceleration uninterrupted.

However, while the pace of the Cupra is beyond the Clio’s reach, there’s not a great deal of joy and inspiration in its efforts. It feels like it looks – upright and narrow – and the ride initially seems firm and a little sharp. Push on a bit and, while there’s no shortage of grip, the steering doesn’t feel as direct as you’d hope. Dive into a turn and the Cupra rolls noticeably and scribes a slightly wider arc than you feel you’re steering, while challenging cambers distract it.

The Clio covers this sort of terrain better than any hot hatch on sale today and, compared with the previous 197 model, it has more low- and mid-range kick, but it’s not enough here. The SEAT’s fuller, boosted delivery (massaged by seven ratios) makes the Clio feel like a 197; you have to get its engine into the upper reaches and keep it there to have a hope of seeing which way the SEAT went. The snappy gearshift and light clutch do their bit.

Dynamically it feels at first that the Clio might be a little aloof, the suggestion promoted by smooth, almost polished steering and a light, disconnected throttle pedal action. It’s not. This is a great chassis, firm but not jarring, one that fends off the bumps that spike through the Ibiza’s cheap, brittle ride and ordinary steering. The Clio flows, melding accuracy with poise and responsiveness, and finds superb grip. And when you’re deep and committed in a turn and ask for a bit more steering response, it delivers. It has better and more consistent brake feel, too; the Ibiza’s brakes bite hard and pitch the car on its nose, but under severe pressure the pedal beneath your foot makes strange modulations. The optional SEAT Racing brakes (£1150) might improve feel.

The Cupra’s gearbox is among the best of its type and there’s a real sense of making time on upshifts. It also gives the option of downshifting when you’re braking late into a turn without taking a hand off the wheel or upsetting the car’s balance. Surprisingly, though, in a straight drag race it’s not able to make up for the shortfall in peak power to the Clio. Claimed performance is 0-62mph in 7.2sec and we did a fraction better than that, recording 0-60mph in 6.9sec. We can claim no influence, however; we simply stood on the throttle and the car did the rest, pulling away in what felt like a slightly sluggish way. The Clio’s tyres scrabbled and squealed as it took off sharply on its way to recording a slower 0-30mph time, but by 60mph it had its nose in front (6.6sec) and at 100mph it had grown the gap to a significant 2.3sec. Ultimately, power tells when you’re able to keep a peaky engine in its sweet spot.

Would it prove so on track, or would the Ibiza’s chassis work better on the smooth West Circuit, it’s lap time bolstered by its torque advantage? The Cupra’s ESP system allows a sporty degree of inside wheel slip on the road but gets in the way a little on track, though even with it off the chassis is rather inert. Yet although the front end is a little reluctant to turn in (the immobile rear doesn’t help), the Cupra seems to use all four tyres quite well. The Clio doesn’t feel any quicker, but it’s much more responsive, especially through the transients like Pif-Paf, peeling into the left carrying lots of speed and then flicking right keenly. Its brakes feel better, too. Even so,  2.3sec quicker over the lap is a surprise.

Despite its impressive A- and B-road pace, the Ibiza Cupra has little of the Clio Cup’s appeal. The ride is at times coarse and in those moments when you need to be super-accurate the Cupra feels fuzzy. It’s as if it has a hastily stiffened regular chassis, like a curry created simply by adding curry powder to a stew. In contrast, the Renault feels like its chassis has been crafted and considered down to the finest detail. It’s not seriously challenged here.

If it’s a paddle-shift automatic hot hatch you want, there’s more to like about the SEAT. The Volkswagen group’s DSG is among the best twin-clutch transmissions out there and there are moments when it can feel very sporty – flat out through the gears and last moment downshifting into a tight turn – and the combo of forced induction and auto plays well in the CO2 test, netting it a low rating. But for a keen driver, DSG takes away more than it gives and strips a layer of the Ibiza Cupra’s appeal away, which is tough because it hasn’t got much to start with. As we stated in our first drive, the tamer, 148bhp Ibiza FR – also DSG-only – is more honest, more homogenous.