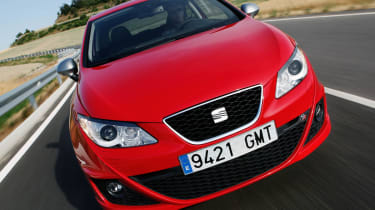 What is it?Oil-burning version of the SEAT Ibiza FR. A sensible hot hatch, you could say. It costs £16,495. Technical highlights?Its 2-litre TDI engine has more torque than a Porsche Cayman, but manages to return a very impressive CO2 figure of 119g/km, making car tax a mere £30 a year. What’s it like to drive?There’s a nice weight and rate to the steering, matching the rate of roll in the suspension perfectly so that it feels like a cohesive package. Engine is punchy when the turbo spools up, as you’d expect, but it also has enough zip in the way it revs to make it more enjoyable than sluggish diesels of old. Having a six-speed manual gearbox makes the experience more enjoyable too. The petrol FR is DSG only, remember. The Spanish roads that SEAT used for the press launch were wonderful in some ways (the scenery was absolutely stunning) but so smooth that delivering a definitive verdict on the dynamics was somewhat tricky – more of that in the magazine. How does it compare?Sweeter than the petrol FR and even the hotter Cupra version. It’s no Mini One D rival in terms of style, but it’s got considerably more power and torque for the same CO2 output. Anything else I need to know?Insurance is just group 8 (compared with group 11 for the petrol) and the diesel will also be the only FR available as a five-door in the UK. Read the full report in evo issue 142, on sale Wednesday March 3, 2010.