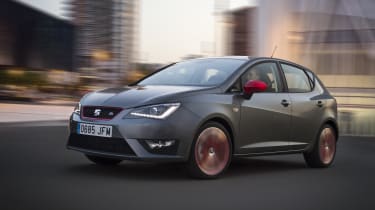 The updated version of SEAT's supermini. Steering and suspension tweaks, an updated interior and a focus on tech are the name of the game here, with the exterior largely being left alone bar that addition of some LED daytime running lights.

The new Ibiza's biggest change is the addition of a new 1-litre 3-cylinder turbo engine to the model range. Available in either 74bhp, 93bhp or 108bhp states of tune, it delivers surprising levels of refinement and response for an engine category that normally does neither.

The FR model is the version we're most interested in here as it's by far the most exciting to drive of the range, although admittedly the 3-cylinder petrol mated with a DSG-auto gearbox feels fairly nippy.

A 7.6-second 0-60 time from the FR with the six-speed manual box puts it at the top end of the warm hatch market in terms of pure performance. A Ford Fiesta Zetec S manages 0-60 in 9.4 seconds and puts out 123bhp for example.

There's little in the way of drama but the engine does at least feel smooth and free-revving. 184 lb ft of torque at 1500 rpm isn't masses, but the FR definitely pulls harder than any of the other Ibiza models we drove. 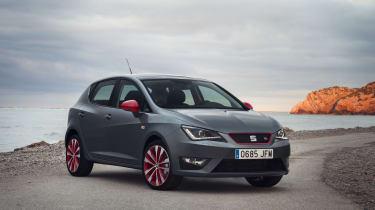 VW group's peppy 3-cylinder petrol turbo proves particularly succesful here, making the new Ibiza in 3-pot form feel almost as quick as the higher capacity FR. It's also a fairly refined motor at low revs, but above 4000rpm, does make its presence known in the cabin via that typically gruff and tinny 3-cylinder engine note. It never feels overly boosted or industrial however.

The 110bhp 3-cylinder is only available with a DSG which does mean that the quicker gearbox does a lot to close the performance gap, but its 9.1-second 0-60 time is slower than the car feels.

For those not interested in out and out performance, the 3-cylinder might be the pick of the bunch as it'll deliver better economy.

The most exciting car in the Ibiza range is by far the 189bhp Cupra. Using the 1.8-litre TSI also found in the VW Polo, the new Cupra uses a mix of injection and indirect injection, as well as turbocharging, to realise nearly 100bhp/litre from its four cylinders.

Torque is also up with the Cupra, delivering 236lb ft, which is a significant jump above the old car's 184lb ft from its 1.4-litre motor. 0-60mph is dispatched in 6.7-seconds, while the car manages a top speed of 146mph.

New to the 2015 Ibiza is a speed sensitive electric power steering system which is a definite improvement over the previous car in terms of feedback. It isn't however a patch on the setup found in the Ford Fiesta, which still leads the way for feel in the small hot hatch market.

Springs, dampers and anti-roll bars have all alos been retuned in the new Ibiza. Optioning the 'SEAT Drive Profile' on the range-topping FR model gives you adaptive damping in two different flavours; sport and comfort. Having tested the car on both the standard and adaptable dampers, we found it fairly difficult to distinguish between the two versions. The FR is definitely a firmer car and delivers less body roll, but we'd be inclined to stick with standard dampers on whichever Ibiza you choose. 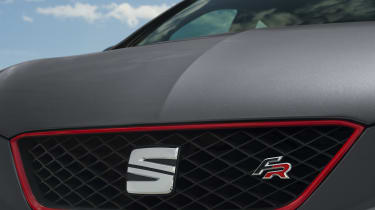 Seat's making a big fuss about the inclusion of its new 'Connect' in car entertainment system. Comprising of both Android Auto, Apple CarPlay and Seat's own proprietary smartphone connection tech, it's one of the best setups we've seen in a car.

Crucially, opting to square off both Android smartphones and the iPhone means whatever type of mobile phone you have, you'll get the best connectivity currently available for phones in a car.

For the most part the new Ibiza is an engaging and fun car to drive. It's miles off a proper hot hatch even in FR trim, but what you do have is a nippy city car that won't bore you to death the moment you hit something twisty.

This is largely due to the revised steering, which was a problem in the old Ibiza. It's much more engaging and gives you a decent idea of the amount of grip you have to play with. You'd be pushing it to say it was full of feedback, but there's added levels on confidence in what the Ibiza is doing over previous versions.

The six speed gearbox on the FR is smooth and fairly engaging, while the five speed is also. The DSG on the other hand delivers the same sort of shift speeds we've come to expect from its utilisation across VW group. It's smooth when you need it and quick the rest of the time. 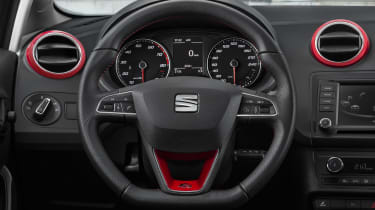 Shifting the DSG into sport does reveal the 3-cylinders slightly gruff top end more, as it's more inclined to hang onto gears longer, but at least those quick changes mean you can cover ground better.

The FR is the quickest of the new Ibiza range that we've driven so far. The stiffer setup does translate to more grip and less roll, but it's far from engaging like a full on hot hatch. Then again, that's not really what the car is designed to be, so for those seeking something modestly warm, it'll more than suffice. It definitely outdoes the Hyundai i30 Turbo which we recently drove for thrills.

The Ford Fiesta and Mazda 2 are core rivals to the Ibiza. Both are a cut above in terms of driving dynamics, but sit far behind when it comes to build quality and tech. 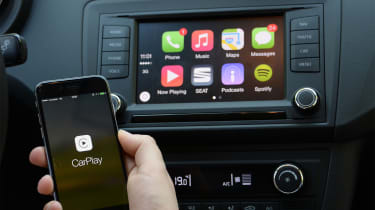 The Ibiza benefits greatly from a revised interior that has the usual VW group fit and finish standard. The new SEAT connect system also does a very good job of squaring away just about every tech need you could possibly have.

The standard Ibiza SC in 'E' trim costs £10,000 on the road. This gets you a 1-litre 74bhp 3-cylinder engine. Jump up to the 'Connect' version of the car, which includes a free Samsung smartphone and the full in car tech setup, and expect to pay £14,520 for a 1.2-litre petrol TSI. 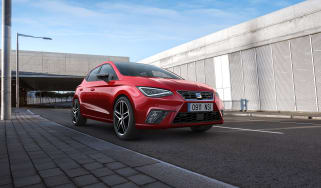 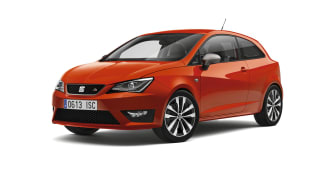 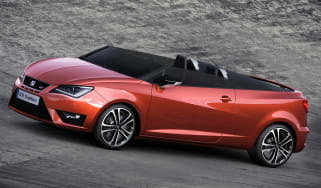 SEAT has unveiled a new concept it will be bringing to next week’s Wothersee event, the annual meet for Volkswagen Group fans in Austria
Visit/seat/ibiza/7142/seat-ibiza-fr-review 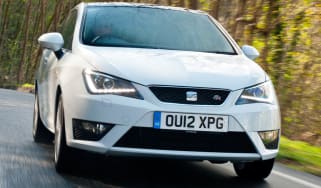 We review the updated-for-2012 SEAT Ibiza FR in 1.4 TSI DSG trim. Can it compete with the best hot superminis?
Advertisement
Visit/seat/ibiza/12352/2012-seat-ibiza-priced 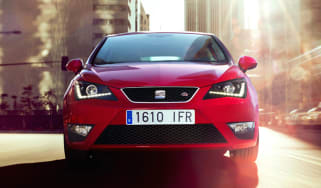 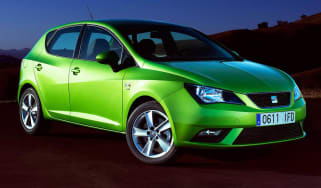 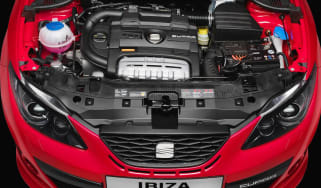 2010 Engine of the Year results

All the important results from the 2010 Engine of the Year awards. VW, BMW, Fiat and AMG all triumph
Visit/seat/ibiza/6974/revo-seat-ibiza-cupra-rt215-review 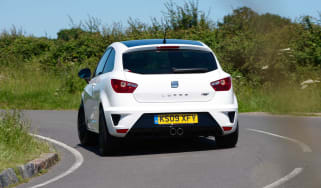 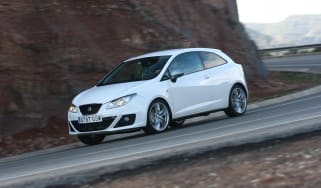 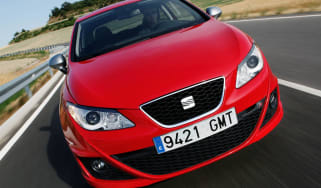 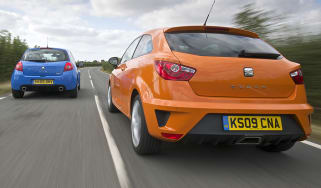 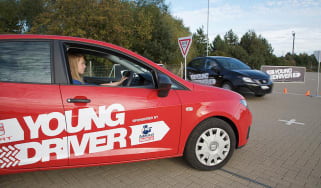 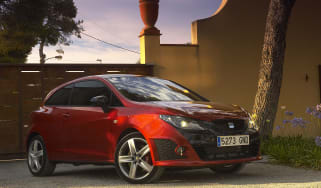 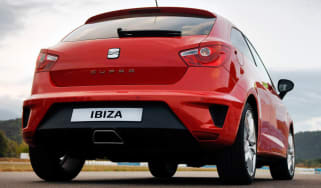 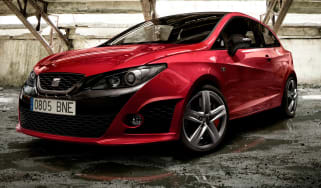 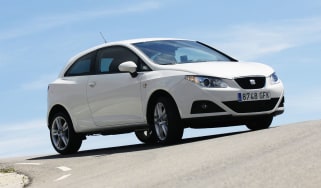 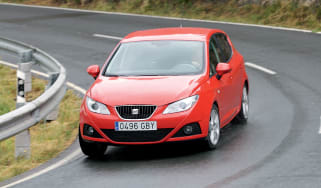