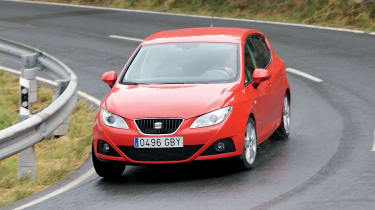 SEAT chose to launch the fourth generation Ibiza in – wait for it – Ibiza. Imaginative, eh? Shame it rained, but it gave us a fair idea of how the new car will look when it makes the leap to Blighty this July. Neat but uninspired just about sums it up.

Having been chief doodler at Lamborghini, this is Luc Donckerwolke’s first full car for his new employer, and he’s tried hard to give it a sense of dynamism with hooded headlights and crisp creases. It is, however, a pale imitation of the Bocanegra concept shown at Geneva.

You’ll be pleased to hear that the show car’s menacing front end will be adopted for the Cupra versions, due in less than a year, but in the meantime all we have are some humble five-doors, the most powerful of which is a 1.6 boasting just 104bhp. And it must be said that it is spectacularly unexciting.

OK, so it’s got more guts and go than the 84bhp 1.4, but it’s also a touch rougher at the top end. Ironically, the engine with the most character is the thrummy entry-level 69bhp 1.2 three-cylinder. Meanwhile, the only one capable of troubling the traction control is the 104bhp 1.9 TDI that rounds off the four-strong engine line-up. Pity it makes enough noise to wake the dead.

And herein lies the Ibiza’s biggest fault. All the engines are already past their sell-by dates. Even SEAT refers to them as ‘proven’ – industry shorthand for long in the tooth. This is a shame, because the new Ibiza has a well designed, well built cabin that has none of the Leon’s claustrophobic darkness, plus it drives perfectly pleasantly. It’s another small car that’s grown up in every way. It’s over four metres long, rides with maturity and is capable, if unremarkable – not so much injected with VW DNA as thoroughly immersed in a vat of it. Nevertheless, it coped well with tight, dusty roads turned treacherous by rain, resisting understeer manfully. The steering’s slick, too (if a bit over-assisted on the diesel).

But surely SEATs should be fun, agile, exuberant little cars? This one, although lighter and stiffer than the model it replaces, isn’t surprising or exciting in any way. It’s polished and well made but utterly lacks pizzazz. Let’s hope the Cupra can get things back on track.