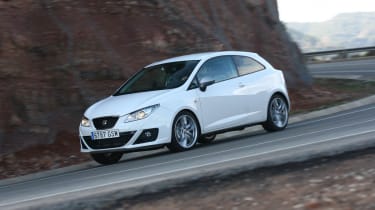 This probably isn’t the first thing you’ve turned to in the magazine. Eyes lured towards the Bentley-Aston-Ferrari group test, no doubt. It probably isn’t even the first thing you looked at on this page, peepers distracted by that flying orange monstrosity over there. But there are several reasons why this little diesel SEAT could well be the hidden gem of the issue.

For a start it has more torque than a Porsche Cayman. This fact becomes even more impressive when you find out that the SEAT’s CO2 rating is only 119g/km, meaning that you’ll pay just £30 in road tax a year. I also like the fact that the engineers have moved the battery to the boot to improve weight distribution, while young drivers will like the fact that it falls into insurance group 8, which is three groups lower than the petrol FR.

All of which would be of absolutely no interest if the car drove with the get up and go of a sheep, like diesels of old. But it doesn’t. You expect the thump of torque that makes it feel considerably gutsier than the petrol FR, but what’s good is that it also avoids a common diesel annoyance by revving with decent verve and zip. This means you can blip the throttle and get a response rather than having to mash it to the floor to wake any kind of wheezy reaction – and that’s of particular importance given that the diesel FR has a manual ’box rather than the seven-speed DSG of the petrol version and the Cupra.

The chassis is trickier to assess, as Spain (where the FR TDI’s launch was held) has spectacularly smooth roads that are wide and fast and completely unlike anything in the UK. However, what’s obvious is that the steering has good, consistent weighting that matches the rate of roll in the suspension perfectly, so the car works pleasingly cohesively. The rear end will get involved but you have to strike just the right sweet- spot of grip with the front end as you turn in if you want to get it to engage.

From the bumps and imperfections the wheels do encounter, the damping doesn’t give the impression of being class leading, but neither is the car’s balance upset horribly. What’s certainly true is that the diesel FR is the sweetest Ibiza available. The only unfortunate thing is that it’s almost a grand more than the petrol FR and only £80 cheaper than the range-topping Cupra.