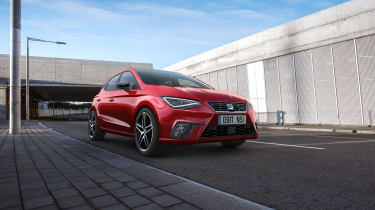 SEAT has unveiled its all-new Ibiza ahead of its debut at this Geneva motor show. The new car is much more grown-up than the car it replaces; it’s bigger, more refined and is only available with a practical five-door body.

Launched in 1984, the Ibiza is SEAT’s longest running and best selling model in the company’s history. The new model has been engineered to be the most refined, safe and practical Ibiza yet. It’s grown slightly too, the new Ibiza is 87mm wider and has a 60mm longer wheelbase. However, it’s actually 2mm shorter than the previous model.

The lack of a sportier, less fussy three-door body would usually be something to lament, but the new Ibiza is such a fine looking car that it’s easy to forget about its sensible five doors. The new car fits into the current SEAT line-up perfectly, and looks like a scaled down version of the marque’s handsome Leon. In fact the Ibiza’s smaller footprint and shorter overhangs make it, arguably, even more attractive than the bigger hatch.

> Read our review of the Seat Leon Cupra 290

The Ibiza is the first VW Group car to use the improved MQB platform called the MQB A0. The new structure means the latest Ibiza’s body is 30 per cent stiffer than the model it replaces.

At launch the Ibiza will be available in four levels of trim: S, SE, a new Xcellence trim and the sporty FR spec. As well as a diffuser-style addition to the rear bumper and more aggressively styled front end, the FR trim brings stiffer suspension with four modes to help tune the car to the drivers’ preferences. The settings for three of the modes – Comfort, Eco and Sport – are fixed but the Individual mode allows you to choose your own preference for the suspension, steering and throttle map.

The new Ibiza comes with a choice of two petrol engines and one diesel. The smaller of the two petrol engines is a 1-litre three-cylinder unit that’s available in two states of tune, either 94bhp or 113bhp. The second petrol motor is the most powerful engine available for the Ibiza, for now. It’s a 1.5-litre four-cylinder that produces 148bhp, but won’t make it into the Ibiza until later in the year.

The diesel engine is a 1.6-litre turbocharged four-cylinder and it too comes with different power outputs. The most powerful is the 94bhp option, however the lower output only produces 15bhp less at 79bhp.