Three-door SEAT Ibiza is no Bocanegra 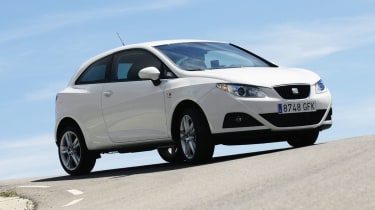 SEAT’s Bocanegra concept was a fine-looking piece of work. All aggressive snout, dramatic slashes and angles, it was built to whet our appetites for the three-door Ibiza. Job done. Appetite fully whetted. Of course, reality rarely lives up to fantasy and so it is with the Bocanegra’s production incarnation, the Ibiza SC, or Sport Coupe.

Still, despite lacking visual drama it’s not a bad looking car, and by being lower and shorter than the five-door it does appear slightly racier. It also gets a choice of either Comfort or Sport set-ups, although they’re actually separated by a gnat’s whisker of body roll, both models offering a supple, forgiving ride and plenty of grip. But it’s not a sporting car to drive.

This is reinforced by the engines. Even the 104bhp 1.6-litre that currently tops the range requires a lot of rowing through the five-speed manual box. The seven-speed, twin-clutch DSG is better, though while the two extra ratios get the best from the engine at lower speeds it still feels a touch breathless on motorways.

All said and done, the Ibiza SC is a competent and practical little machine, but it won’t fulfil any keen drivers’ fantasies.