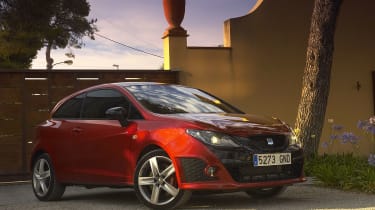 You probably understand SEAT’s performance hierarchy enough to know that the FR is the warm one and the Cupra (a conjoined and truncated form of Cup Racing) is the hot one. Bocanegra, however, might have you scratching your head – in fact it hasn’t been heard of since the ’70s when it was the nickname given to a 1200 Sport with a sooty snout (bocanegra is Spanish for black nose).

But now it’s back and it’s the limited-edition designer model. You can have the Bocanegra treatment applied to the Cupra (and to the FR on the Continent but not in the UK, for some reason), although in truth for £700 it doesn’t actually change the styling that much, mostly amounting to a black swathe across the car’s sniffer. It does look meaner, but I’d hoped that SEAT might have been a little bolder and differentiated it slightly more. However, dark schnoz or not, the Ibiza is a funky looking supermini with all its slashes, and, as the current Clio Cup proves, it doesn’t matter how it looks as long as it drives like a hot hatch ought…

The drivetrain is interesting. The engine in both the FR and Cupra is the 1.4 twin-charger that we first saw in a Golf last year. For those of you that missed it, there is both a supercharger and also a turbocharger forcing the induction, making the pint-sized capacity punch above its weight, producing 148bhp and 162lb ft in the FR, 178bhp and 184lb ft in the Cupra. And if you think the engine choice is brave, then prepare to raise an eyebrow at the fact that these cars will only be available with seven-speed DSG gearboxes.

We’re in Barcelona for the launch and after jumping into a Cupra we spend some time just putting distance between ourselves and the airport whilst appreciating the diamond-quilted seat cloth (part of the Bocanegra changes). There’s an ambience of big-car refinement on a motorway, although the suspension is rather too solid to be restful around traffic-calmed towns. Strangely (because my height means I’m usually quite adjustable) I struggle to find a seating position that isn’t a little awkward, although the lateral support in the chairs is excellent.

After a while we’re directed to the sort of road that Spain does best: smooth, tight, slightly dusty, relentlessly twisting with second- and third-gear corners, and great fun.

It is also where we leave the Cupra. Although it pulls and revs well and it’s fun flicking up and down the gearbox with the paddles, when you turn into a corner hard the stiff suspension only seems to work up to a certain level of lean, then it sort of locks out so that you are left leaning entirely on the tyres (mostly the outside front), which inevitably scrub away grip rather scrappily.

The FR that we come back to the road in later is much better. The words ‘take the less powerful one, it’s better’ always used to frustrate me, because I thought going faster must be better, but you’ll have to trust me. It feels like there’s less power than the extra half-second to 62mph (7.7sec rather than 7.2) might suggest, but I’m sure there are chips for that. In the FR the well-weighted and direct but slightly soft steering and the 15 per cent squashier suspension match each other much better. Turn in and although there’s less bite, there is much more fluidity, and the chassis and tyres feel in greater harmony. Understeer is still the predominant balance, ESP can’t be turned off completely and the XDS electronic differential doesn’t grab your attention, but it is fun chucking the FR around.

No doubt SEAT would point to the DSG ’box, but at £14,995 and £15,995 respectively the FR and Cupra Ibizas aren’t undercutting the Clio/Mini brigade by much, and purely on a driving level they aren’t quite there. However, what that engine and gearbox do offer is 44mpg on the combined cycle for both the FR and the Cupra. And that’s very good. So if you need economy and want to avoid all the bugbears of a diesel then try an Ibiza. Our suggestion is to go for an FR, and then get the engine chipped to Cupra specification.