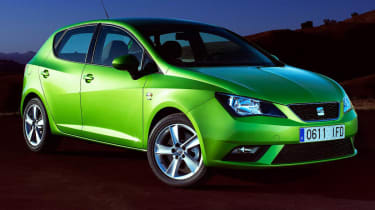 SEAT has refreshed its best-selling car, the Ibiza. The current model has been on sale for almost four years, finding over half a million buyers in the process. With many of those customers pinpointing the Ibiza’s design as their reason for purchase, the looks have been sharpened to keep it up to date. It’s evolution rather than revolution though, with minor tweaks to headlights and bumpers and new sets of alloys rather than a styling overhaul. Bi-xenons and LED daytime running lights are among the options. There’s design tweaks inside, too, though again it’s detail improvements – a new instrument binnacle, bigger glovebox and the option of SEAT’s new touchscreen media system, which is new to the Ibiza. The current Ibiza engine range continues service, though with improved mpg and CO2 figures. There's a wealth of options ranging from the 89g/km, tax-free Ecomotive diesel to the 148bhp 1.4-litre twin-charged FR warm hatch and its DSG automatic transmission. There's an ST estate equipped with the latter engine now, too. All models get ESP, and every Ibiza with over 100bhp gets the company’s XDS electronic diff lock.

The current 178bhp Ibiza Cupra carries on, replaced by an updated version in the summer. UK sales of the facelifted Ibiza begin in spring 2012, with firmer technical details and pricing information expected when the wraps are pulled off the car at the Geneva motor show in early March. We can expect to see an all-new Leon hatchback this year, too.