There are one or two reasons to buy a Fabia, but a fair few more to not 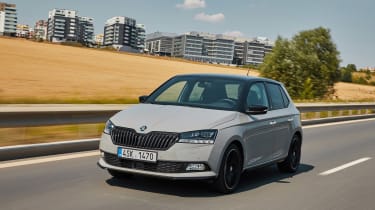 This is the new-for-2018 Skoda Fabia. It may not look that different to the last one, but as one of Skoda’s highest-selling models, this third-generation model has been given a refresh to keep it competitive in the supermini segment.

Unfortunately, since this generation’s launch in 2014, the supermini class has taken an upward step in terms of both refinement and tech, making the Fabia more vulnerable than Skoda might like to admit. The two dominating models in the class – the Polo and Fiesta – are both all-new and at full strength, too, so does the new Fabia deserve any of your attention?

On first acquaintance, it seems to offer many of the Polo’s attributes, sharing engines, transmissions and an overall VW-group sheen with its more expensive relative, but under the skin the Fabia makes do with a more higgledy-piggledy mixture of both the new and old Polo. This is felt mostly through the slightly cramped interior, which once was class leading, but has since been overtaken by the new Polo and the latest SEAT Ibiza, both of which now trounce the Fabia for interior and boot space. On the flip side, Skoda offers a Fabia estate, but you just wouldn’t. 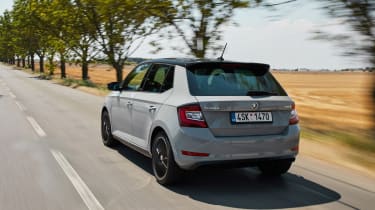 There is further fly in the ointment, too – as with the previous generation Fabia the new model does without a vRS hot hatch derivitive and nor does Skoda intend on developing one. The Monte Carlo model that tops the range might fill you with hope of a warm version, at least, but has no mechanical upgrades, or changes over the standard models, save for a set of larger wheels and more sculpted seats.

It is still the Fabia that's cheaper than most rivals though, quite significantly in some cases, and although it does have its compromises, Skoda hasn’t skimped on safety or tech, both of which have been focused on in this update.

Engines at launch are all 1-litre, three-cylinder units, comprising two turbocharged TSI and one non-turbocharged MPI versions. They vary from the glacial 74bhp entry car (plus what must surely be a mobility-scooter specification 59bhp version to come) through to 93bhp and 109bhp TSI units. All engines are connected to manual gearboxes – five-speeds for most and six for the top TSI – which are pleasingly slick, easy to use and with just enough notchiness to stop it feeling slack. The top-spec 109bhp TSI is also available with a seven-speed DSG gearbox, which is typically smooth and well sorted, with only a hint of the judder and delay associated with most dual-clutch gearboxes.

> Click here for our review of the previous-generation Fabia 1.2TSI

Performance, understandably, is not really a high priority. The 74bhp car will reach 62mph in a heart-stopping 14.9sec, uses more fuel than the more powerful models, and is generally best avoided. The 94bhp and 109bhp turbocharged units are torquey enough to flow with traffic, but little more, hitting 62mph in 10.4 and 9.6sec respectively. The Fabia’s less insulated interior does allow some more of the thrummy three-pot sound to enter the cabin, though, helping it feel a little more interactive than the new Polo at low speeds, although this might well be an accident and not by design... 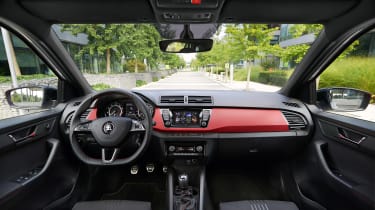 It’s pleasingly satisfying to write that the Fabia does not ride on Volkswagen’s MQB platform, although describing anything under the Fabia’s bodywork as a technical highlight is probably pushing it a little… MacPherson struts up front and a torsion beam out back make up the basic suspension, with no form of adaptive dampers or even a sports suspension set-up available.

The ride you’re left with is relatively well sorted, though, absorbing the ridges and corrugations of our Czech test route with enough pliancy. We tried the Fabia on both 16 and 17-inch wheels and the latter didn’t seem to affect the ride quality negatively, although we’d suggest the new optional 18-inch units might be a bit of overkill.

Changes for the facelift amount to nearly nothing underneath the skin, but new LED headlights are available for the first time on a Fabia, likewise an upgraded infotainment system and new active safety tech like adaptive cruise control, a reversing camera and blind spot monitoring are also in higher-specification models. 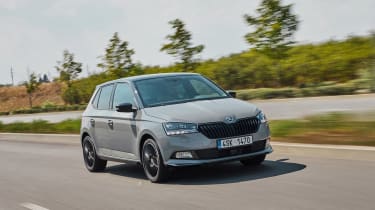 If you’re expecting the Fabia to have an identical driving experience to something like the Polo, you’ll be surprised to hear that it’s not. Despite sharing much of its hardware with the Polo, its more rudimentary underpinnings give the Fabia a more ‘basic’ feel. Somewhat lessened is the neoprene skin-like slickness, but what’s in its place is by no means a bad thing.

To begin with the steering has more heft to it, and although it would be a bit rich to call it feelsome, it does inspire more confidence than the lifeless Polo, which I suppose is the same thing. Push a little deeper into the Fabia’s dynamic capabilities and you’ll find that the ride has a slight extra edge over the positively cushion-like Polo (on standard suspension, admittedly), again increasing the interaction between your inputs and the Fabia’s responses. Of course, it’s hardly as intuitive or fluid as the new Fiesta, but the somewhat basic set-up does seem to have stripped away some of the Polo’s polish, only to reveal an entirely able chassis underneath.

The SEAT Ibiza is a possible fly in the ointment, arguably combining the best traits from both the Ford and Volkswagen into a sharply designed little Spanish omelette, but if a lower asking price is top of your agenda, the Skoda does give you the most bang for your buck. 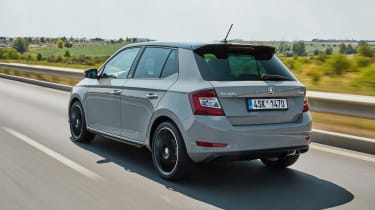 Pricing is where the Fabia’s real USP lies. The entry-level Fabia S starts at just £12,840 – over £1400 less than the entry-level VW Polo and Ford Fiesta. Jump up a trim level and engine choice, and the 94bhp SE model also compares favourably at £14,845, while the equivalent SEAT Ibiza, Fiesta Zetec and Polo SE all sit between £16k and £17k.

Often overlooked and deeply underrated is the Mazda 2, which actually undercuts the equivalent Fabia on price in some cases, but loses out where equipment is concerned. It is the far more entertaining drive, though, and in mid-spec 95bhp SEL Nav+ form is a very worthy alternative.

Other rivals such as the Peugeot 208, Renault Clio, Citroen C3, Toyota Yaris, Nissan Micra etc, all do slightly different things at similar price-points, but trail the class leaders. The crux of the supermini class is a pretty simple one: the Fiesta is the best to drive, the Polo is the most grown up, the Ibiza does the best compromise between the two, and the Mazda 2 is the one you should actually go out and buy. Simple. 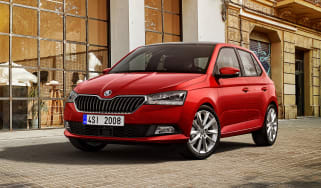 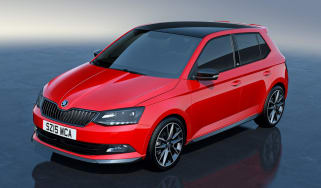 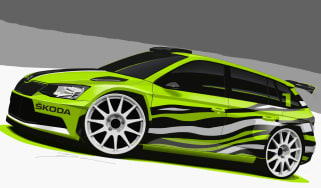 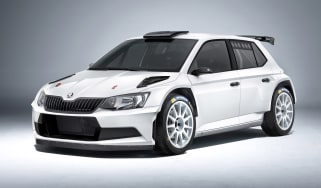 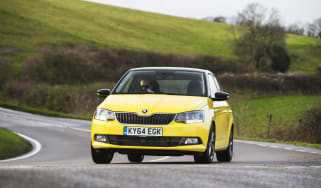 Ford's Fiesta is the fun supermini to beat. The Fabia is a better car, but a poor entertainer
Visit/skoda/fabia/14504/skoda-fabia-paris-motor-show-2014 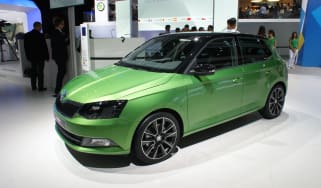 Skoda has released details and specs for its Mk3 Fabia, confirming class-leading practicality and new levels of efficiency
Visit/skoda/fabia/13216/skoda-rapid-sport-concept-car 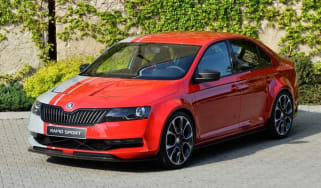 The Skoda Rapid Sport concept debuts at Worthersee tuning show. Is a hot Rapid vRS on the way?
Visit/skoda/fabia/7027/driven-skoda-fabia-12-tsi-monte-carlo 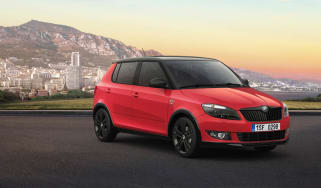 Skoda is cashing in on its rallying connections with this limited edition, but is the Fabia Monte Carlo more than an expensive bodykit?
Visit/skoda/fabia/11761/skoda-fabia-vrs-2000-speedster-concept-car 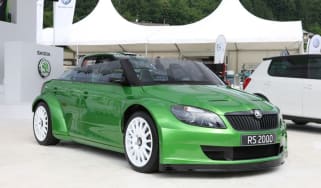 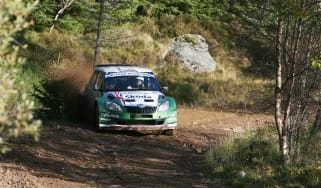 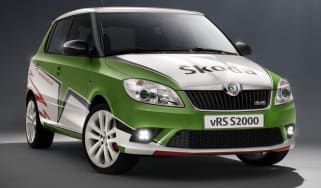 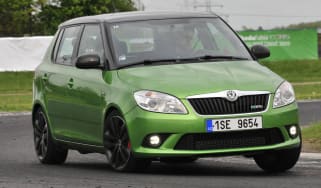 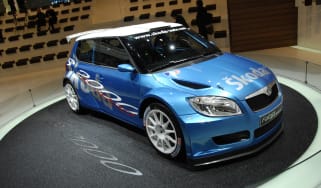