Powered by a turbocharged 1.6-litre four-pot, the four-wheel drive Fabia R 5 produces close to 300bhp, sending drive through a five-speed sequential gearbox. It weighs no less than 1230kg (in accordance with FIA rules), and sits on MacPherson struts, part of a suspension setup that’s be adjustable to enable competition on stages ranging between smooth tarmac and tough off-road terrain. 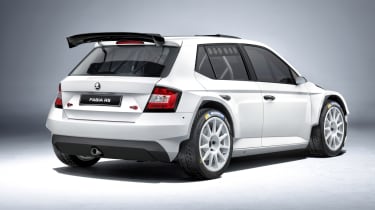 The car has also received a WRC-style makeover, gaining bulging, squared off arches and tauter proportions. Unsurprisingly, it's generated lots of interest from customer teams, though there's no word as to when it'll make it to competition.

'We are delighted that the International Automobile Federation FIA has given us the green light. Now we can prove just how good our new rally car is in the race series,' says Skoda Board Member for Development, Dr. Frank Welsch

'When working on the third-generation production Fabia, which enjoyed an extremely successful start, we incorporated some of the genes from our rally cars and developed the most emotive Fabia ever. Conversely, the production model now formed the basis for the new Fabia R 5.' 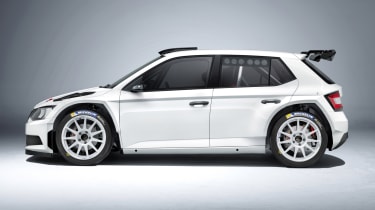 The car the R 5 replaces, the Fabia Super 2000, enjoyed great success in 2014. It achieved title wins in the FIA European Rally Championship and FIA Asia-Pacific Rally Championship amongst others, so there's certainly massive scope for the R 5 to be an even more competitive rally car.

If it ever finds itself up against Prodrive's mighty VW Golf SCRC in an open-regs championship, it'll certainly have to be...