Ford's Fiesta is the fun supermini to beat. The Fabia is a better car, but a poor entertainer 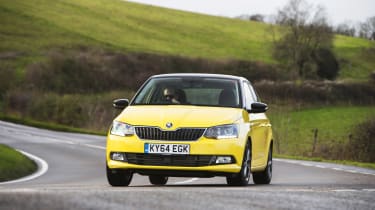 The new Skoda Fabia, a rival for other B-segment hatchbacks such as the Ford Fiesta, Renault Clio and Peugeot 208.

You might wonder why evo is testing such a vehicle. On the face of it, the Fabia isn’t a particularly thrilling car but given how much joy even a basic Fiesta can provide, regular hatchbacks need not necessarily be dull to drive.

Skoda has so far denied plans for a vRS version of the new Fabia, given the last model’s relative lack of success – so this version is the sportiest option buyers will get for the time being.

Given the Fabia’s chiselled but relatively bulky form the 1.2-litre, 108bhp TSI petrol could have its work cut out.

The reality, thankfully, is more promising. With 129lb ft of torque at 1400rpm and a seven-speed DSG through which to delegate drive, the Fabia’s 1103kg kerb weight proves little obstacle to reasonable pace. The engine does its best work in the mid range, though does begin to sound strained as the revs climb towards the red line. 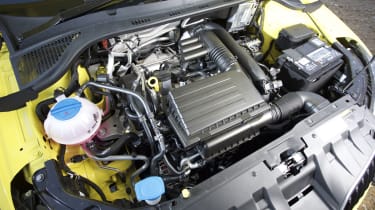 The caveat to the above is that you must knock the gear selector into ‘Sport’. As is typical these days, the regular automatic mode tends towards economical operation, changing up at the earliest opportunity and stunting the car’s responses. Opt for Sport mode, or change gear yourself by knocking the lever fore and aft (there are no wheel-mounted paddles), and a 9.4 second 0-62mph sprint is at your disposal. Top speed is 124mph.

When Skoda lists a 330 litre boot and new infotainment options as two of the highlights of its new model, you’ll get some idea as to the areas Skoda has concentrated on with the Fabia.

There are some changes that pique our interests though: The car is 8mm shorter than before despite increased interior room, and weight has dropped by up to 65kg on some models – partly because Skoda has employed the VW Group’s advanced MQB architecture in the new car.

Not as entertaining as the class-leading Fiesta, in short. Chief culprit is the steering, which transmits virtually nothing of the road below to your fingertips.

The problem is compounded by low levels of grip. Persistent understeer is the Fabia’s default stance in brisk cornering, but it’s indicated only by a change in sound and your position on the road – feedback through the wheel is absent. 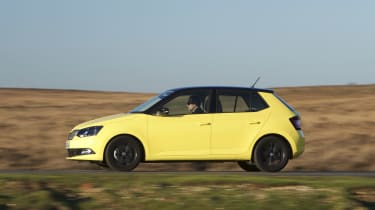 That in turn leads to a lack of confidence when attempting to drive quickly. Where the cheapest, least driver-centric Fiesta encourages you to press on and enjoy the sensations of its ideally-weighted controls, the Fabia – even on optional £120 ‘Sports suspension’ – is better at a gentler pace.

Driven this way, it’s easier to appreciate the supple ride (seemingly unaffected by the lowered springs) and the resulting relaxed motorway gait.

While nothing special to drive, the Fabia does at least counter with an excellent cabin. The sense of solidity is perhaps the best in its class and the layout as clear and logical as you’d expect given Skoda’s no-nonsense track record in this department.

The obvious choice – and indeed the car we’d choose ourselves given the limitations of a modest budget and the need for a frugal but entertaining supermini – is the Ford Fiesta.

Its 1.0-litre Ecoboost three-cylinder is uncommonly punchy for such a small unit and remarkably refined, while the Ford’s chassis is a delight – supple, adjustable and possessed with steering offering plenty of feedback. 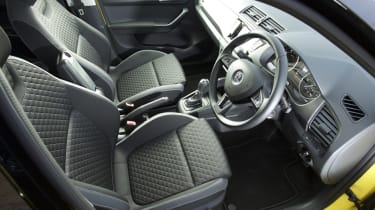 The Ford's interior is a mess compared to the Skoda's cabin and it’s nothing like as suitable for carrying a full complement of passengers, but it’s considerably better at offering the characteristics evo looks for in a car – a talented chassis, a lively disposition and above all, fun.