Skoda is cashing in on its rallying connections with this limited edition, but is the Fabia Monte Carlo more than an expensive bodykit? 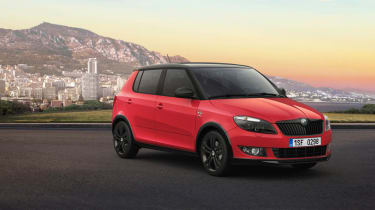 ‘A celebration of 100 years of the Monte Carlo rally’ according to Skoda, although it looks more like a small hatchback to us. Although the relationship to Skoda’s rallying efforts is a distant one, the Fabia Monte Carlo certainly comes with plenty of the right visual cues, including black 17-inch alloys, a black gloss roof, tinted rear glass and – inside – slightly grippier ‘sports seats’.

Being a trim level, rather than a model in its own right, the Fabia Monte Carlo comes with various engine choices, from a boggo 68bhp 1.2-litre petrol upwards. But we’re testing the (slightly) more exciting 1.2-litre petrol turbo TSI model with 104bhp.

The Fabia Monte Carlo looks the part – but is it really a cut-price alternative to the Fabia vRS?

The 1.2-litre TSI motor is familiar from across the lower reaches of the VW empire. It’s a downsized four-cylinder petrol turbo that’s claimed to offer comparable performance to a naturally aspirated 1.6-litre four while delivering the same economy as a boggo 1.2. That means a claimed 103bhp accompanied by 129lb ft of torque.

Despite looking the part – and gaining the set of vRS-alike black alloy wheels – other mechanical changes are limited, with slightly firmer dampers from those fitted to the ‘SE’ version its based on being the highlight. Unusually for a modern car with performance aspirations, the Monte Carlo doesn’t get any sort of stability control.

Despite the lack of substantive mechanical changes, the Fabia Monte Carlo is actually pretty decent to drive, with the upgraded wheels (and 205/40 R17 tyres) adding grip while allowing the suspension to keep most of the ride compliance of the standard car.

Performance is decent considering the engine’s diminutive capacity. There’s very little turbo lag and the middle reaches of the rev counter deliver reasonable overtaking urge. It’s not a revver, though – peak power arrives at a diesel-like 5000rpm and the motor really tightens up at about 5500rpm - there’s no point trying to take it any closer to its 6200 rpm redline.

As with the rest of the range the Fabia’s steering feel is artificially light and there’s never much impression as to what the front wheels are thinking. Grip levels are decent and the Fabia seems to enjoy being chucked about, although the light, rubbery gearshift saps your enthusiasm for a real backroad mission

There’s lots to like about this engine, and the Fabia is a decent way to experience it. The Monte Carlo’s problem is that it’s £1640 more than the 1.2 TSI SE that it’s based on – which is a hefty supplement for what’s basically a styling kit.

Fuel economy is good, although we couldn’t get near the official 53mpg during everyday use. We managed 41mpg for rapid, real world progress.