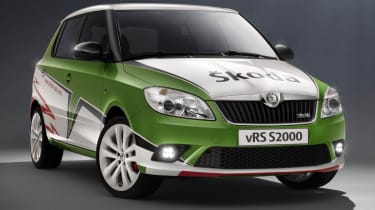 Skoda has announced a special S2000 limited edition of its Fabia vRS hot hatchback, which commemorates the Czech firm’s motorsport achievements in 2010. Based on the standard Fabia vRS, the S2000 features the same 178bhp 1.4 TSI petrol engine allied to a seven-speed DSG dual-clutch gearbox. This means that the 0-62mph-time (7.3sec) and top speed (139mph) are unchanged over the regular hot hatch. What the S2000 does add is a bunch of exterior add-ons, including a Rallye Green paint scheme and white 17in alloys, as well as a race livery based on that of the Fabia S2000 rally car, which won top honours in the 2010 International Rally Challenge. You’ll have to hurry if you want an S2000 though - only 200 examples are slated for production, with 20 of those destined for the UK. Read our review of the Skoda Fabia vRS here