Technically a show car at this stage, the Cupra Ibiza should arrive next year and rival the Ford Fiesta ST 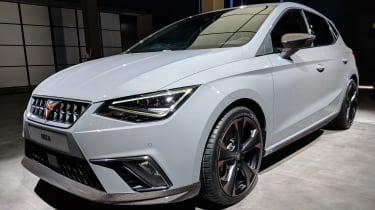 SEAT’s launch of Cupra as a standalone performance brand has not only yielded the production-ready Ateca, but also this pre-production Cupra Ibiza. Word of SEAT’s refusal to build a performance version of its popular supermini came as a surprise to many when the current Ibiza was launched last year; this is obviously the reason.

So far details remain thin on the ground, and Cupra is adamant this is only a show car, but insiders say that the Ibiza should reach showrooms sometime next year, featuring a turbocharged four-cylinder engine with somewhere between 200 and 220bhp on tap. Sharing its MQB-A platform with the VW Polo GTI, which uses a 197bhp version of the familiar 2-litre EA888 engine, we suspect this Ibiza might get a version of the same unit.

> Click here for more on the Cupra Ateca SUV

Along with the rise in power are bigger brakes, 18-inch wheels wrapped in Michelin Pilot Sport 4 tyres, and a DSG gearbox. There is no mention at this point of the option of a manual ’box, but the facility is there for it within VAG’s box of tricks. Visually the Cupra Ibiza shares much with its Ateca sibling, featuring more aggressive front and rear styling and copper detailing like that on the limited-run Leon Cupra R (which is still a SEAT, confusingly). 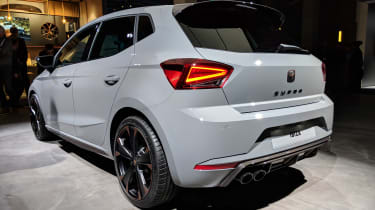 Inside, the show car utilises plenty of Alcantara and features yet more copper elements, while a digital dial pack also makes an appearance for the first time in an Ibiza. It must be taken into account that this is still a show car and if/when it does reach production details are likely to change.

Cupra’s efforts have not just been applied to the Ibiza either, as its SUV spin-off, the Arona, will also adopt similar mechanical and aesthetic upgrades, although it too is yet to be confirmed for production.