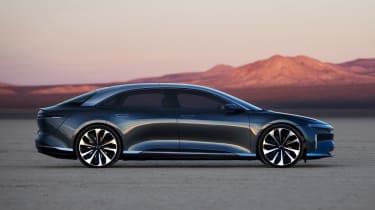 The Porsche Taycan boasts mighty numbers and offers staggering performance to match, but US-based Lucid Motors has launched a rival all-electric saloon that’s set to be even more potent. With US deliveries beginning in early 2021, the range is said to start at under $80,000.

The Air utilises an entirely new EV platform, with in-house designed powertrains allowing for clever packaging and generous passenger and luggage space. The electric motors used across the range have all been designed with high power density in mind, and for efficiency the car has a drag coefficient of just 0.21 – slipperier than even the Porsche Taycan.

Revealed at the brand’s Silicon Valley headquarters, the Air line-up spans from the sub-$80,000 entry-level model to the range-topping Dream Edition, costing from $169,000. Details on the more affordable variant are yet to be announced, but even the middling Touring and Grand Touring Editions boast outputs of 612bhp and 789bhp respectively.

Of course, the extreme Dream Edition is the model of greatest interest, being a family saloon that’s said to be one of the quickest road-going cars ever produced. Fed by a 113kWh battery pack, a pair of motors send 1065bhp through all four wheels, allowing the car to go from standstill to 60mph in a quoted 2.5sec and on to a 168mph top speed; for reference, the Taycan Turbo S covers the 0-60mph sprint in 2.6sec and tops out at 160mph. Perhaps most impressive is the Air’s 9.9sec quarter-mile time, beating the Taycan’s by quite some margin and matching some of today’s fastest supercars. 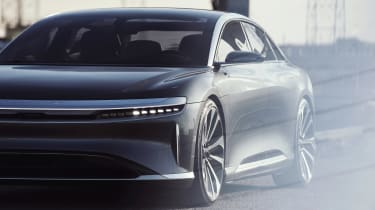 Porsche impressed with its advanced 800V architecture, but Lucid’s Air utilises ‘900V+’ for both improved performance and the fastest charge rates we’ve seen yet. Should you find a capable DC fast charging station, it will accept charge at up to 20 miles per minute, equating to around 300 miles of charge in only 20 minutes. WLTP-certified figures are still to come. However, Lucid claims an EPA range of 517 miles for the 789bhp Air Grand Touring, with even the 1065bhp variant exceeding 500 miles in the right spec.

Inside the Air you’ll find a 34-inch curved 5K display on the dashboard, with a retractable ‘pilot panel’ providing the front passenger with further controls. For those who aren’t fond of touch interfaces, milled physical buttons can be found on the steering wheel and for features such as volume and climate control. 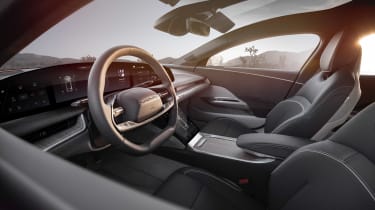 As you’d expect from such a car, it’s also coated in a myriad of sensors – 32 to be precise. Radar, ultrasonic and even a high-resolution LIDAR unit not only help keep occupants safe, but also allow for Level 2 and 3 driver assistance.

European delivery dates and pricing are yet to be announced, but North American deliveries are set to begin in spring 2021.