Billy Monger took the wheel of a Formula 1 car, thanks to Tour-De-Force, a year after his dramatic accident. 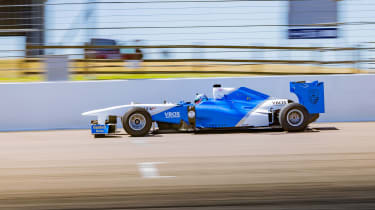 Double amputee Billy Monger carried out his first test in a Formula 1 car, modified by motorsport engineering specialist TDF (Tour-De-Force). Carlin (Monger’s F3 team), stunt driver Terry Grant and Heritage F1 all had a hand in getting Monger behind the wheel of a 2011 Sauber C30.

During the third round of the 2017 British Formula 4 championship Monger endured a crash with life-changing consequences. Just 17 years old at the time, the British racing driver rear-ended an unsighted, stationary car on track and had both of his legs amputated as a result.

However, post-recovery, Monger returned to racing in the 2018 British Formula 3 series, in spite of his injuries, with his ambition to become an F1 driver still intact. A few days ago, he got the first taste of that goal by driving an F1 car at Rockingham.

Tour-De-Force – ‘one of the few companies in the world capable of supporting a V10-era F1 car’ – modified the Sauber C30, supplied by Heritage F1, to accommodate Monger’s unique, controls-based requirements. A custom pedal box was machined so Monger could meter out brake inputs accurately with his prosthetic leg, and a clutch paddle on the steering wheel was repurposed as the throttle.

The hardware and technology is ‘bolt-in, bolt-out’ according to TDF, hence can be fitted to a variety of Formula cars, with the provision for customisation to meet the requirements of other drivers. Faulks and Noel confirmed TDF are ‘keen to push the technology’ in the belief it can help injured drivers to continue to participate in motorsport.

More tests for Monger are in the pipeline, with the initial shakedown serving to confirm he is comfortable driving the car, as detailed by Faulks and Noel: ‘Billy is confident, technically very capable and his feedback is very good.’ Regarding further tests, the pair went on to say ‘there’s potential to break UK and European lap records’ with Billy and that a ‘Guinness World Record’ was on the cards, too.