The brand’s first all-electric racer has not two, but three impressive accolades to its name thanks to driver Romain Dumas 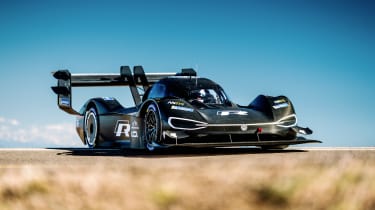 As the world of electrification nears, manufacturers are turning to Formula E, and the production of small, all-electric hatchbacks to show their commitment to change. Volkswagen has taken somewhat of a different approach, however, creating an all-electric racer to destroy lap records around the globe.

First on its list was the famous Pikes Peak hill climb, a demanding point-to-point course requiring bespoke, finely honed machinery to achieve the very best times. Historically, competitors have had to push combustion engines to the limit in order to combat the effects of altitude, and the loss of power that comes with it. Being all-electric, the ID R saw no such issues.

In June of 2018, Le Mans winner Romain Dumas took the ID R up the 12.42-mile hill climb, smashing the overall record previously held by Peugeot and Sebastien Loeb by over 15 seconds in the process. Climbing 5000ft through 156 turns, at an average speed of 90mph, the racer’s two electric motors producing around 670bhp pushed it to the 14,115ft finish line in just 7min 57sec.

As if one record wasn’t enough, just a year went by before Volkswagen attempted to break another – the fastest lap of the Nürburgring in an EV. In June of 2019, Dumas took to the wheel of the ID R once again to tackle perhaps the most challenging track in existence, with a record-breaking lap in mind...

Chinese EV firm Nio and its EP9 electric supercar set the previous record almost two years earlier. However, this was child's play for the ID R, as it beat it by over 40 seconds, recording a staggering time of 6min 5.336sec. To achieve this, the car’s aero package was modified for the higher speeds and more dense air of the Nürburgring, adding an F1-style drag reduction system (DRS) to the lower-profile rear spoiler – this allowed a flap to open during high speed sections, and to close during corners for optimum performance. 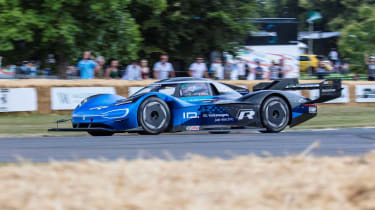 The powertrain was unchanged from the Pikes Peak-winning ID R, borrowing the 500kW (670bhp) electric motor and 44kWh battery pack from its own Formula E racer. Thanks to the incredibly high efficiency rating of the electric motor, the key development challenges came in the area of battery management. Volkswagen Motorsport’s technical director, François-Xavier Demaison, stated in a conversation with evo that, ‘You need to take care of the battery pack like you do your children.’ The battery pack itself had to be carefully measured for the attempt, the Nordschleife’s long back straight causing the biggest technical headache for the team.

Under a month after it tackled the Nürburgring, the model took to the Goodwood hill climb to break the all-time record, climbing the course in just 39.9sec, beating the two-decade-old record previously held by Nick Heidfeld in a McLaren MP4/13. It’s safe to say the ID R’s rather quick. Let’s hope this is a sign of things to come…