To celebrate its 60th anniversary, the brand is producing 500 Cooper S 60 Years Edition cars for the UK 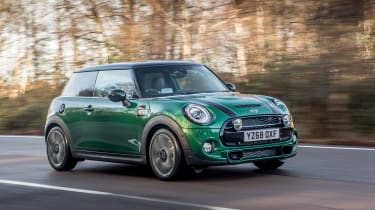 Six decades after the first Mini was unveiled to the world, the brand has announced a limited-run variant of the Cooper S to mark the occasion. The first of ‘many celebrations’ planned for 2019, the model will be produced at the Mini Plant in Oxford, with just 500 examples for the UK.

All 60 Years Edition cars will be finished in an exclusive ‘British Racing Green IV’ paint, feature a contrasting piano black roof and mirror caps, 60th anniversary specific bonnet stripes and 17-inch alloy wheels in an exclusive two-tone finish. The left-hand bonnet stripe, indicators and puddle projectors will also all feature 60 Years Edition emblems, alongside the addition of spot lamps on the front grille of every UK car, a nod to the brand’s rally history.

Special-edition tweaks don’t stop on the outside, with the seats finished in a rather fetching 60th anniversary-specific ‘Dark Cacao’ shade combined with contrast stitching and piping to match the green exterior - 60 Years Edition emblems also feature on the steering wheel and front seats. 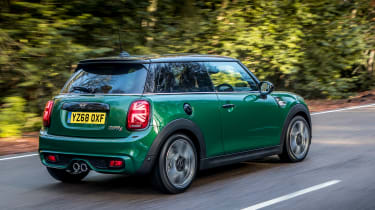 Sadly, there’s no bump in performance for this model and so the 0-62mph sprint is acheived in the same 6.7secs time as in the standard car - the model will also come exclusively with an automatic transmission for the UK.

Mini’s Navigation Plus pack will be equipped in all 60th anniversary cars, providing a larger 8.8” screen, Apple CarPlay and wireless charging. The Comfort Plus Pack will also provide the driver with a rear view camera, folding wing mirrors and parking sensors.

The brand’s story began on 26 August 1959, when British Motor Corporation (BMC) revealed the Mini, a car that undoubtedly revolutionised the compact car segment. Since then, the Mini brand famously joined the BMW Group, a move that put it on the path to achieving sales of 2,490,000 passenger vehicles worldwide in 2018 alone.

Just 500 examples of the Mini Cooper S 60 Years Edition vehicles will be available in the UK at the price of £29,990. Order books open in March.