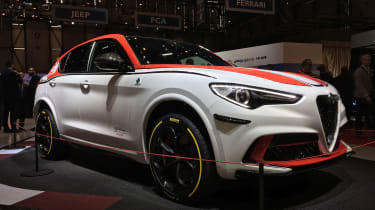 Along with the surprise reveal of its new Tonale compact SUV in Geneva Alfa Romeo also revealed new ‘Alfa Romeo Racing’ special editions of its Stelvio and Giulia Quadrifoglio models. To mark the arrival of Antonio Giovinazzi on its Formula 1 team’s driver roster, and to celebrate the brand’s extensive racing history as a whole the two special editions feature an array of updates over their standard counterparts.

The models promise a marginally lighter kerb weight – down by 28kgs –compared with their standard counterparts, because as well as the various lightweight carbonfibre components and the lighter exhaust system, the cars also get carbon-ceramic brake discs, reducing unsprung weight. The Quadrifoglios also feature a very mild power increase – up 10bhp to 513bhp – although Alfa has yet to make any increased performance claims other than saying their ‘excellent dynamic qualities’ have been ‘enhanced’. 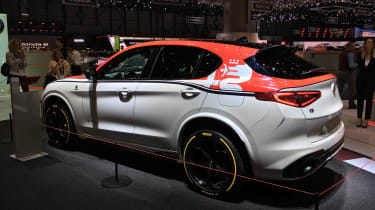 There will also be a special edition within the ‘Alfa Romeo Racing’ special edition as ten Stelvio and ten Giulia Quadrifoglio customers will be able to buy a car that honours one of Alfa Romeo’s ten F1 victories. Each example will bear a dedicated badge bearing the name of a Grand Prix won by Alfa Romeo and the corresponding year. The pricing of such exclusivity has yet to be revealed.