Ahead of the reveal of the SQ8, the tuner has shown its take on Ingolstadt’s latest SUV 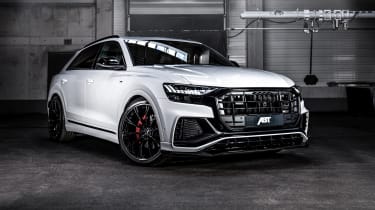 The performance-oriented SQ8 is yet to be unveiled, so to satisfy demand, ABT has taken it upon itself to fill the gap for impatient SUV buyers. Alongside a slight bump in power, the Audi tuner has given the model a new bodykit, as well as tweaks inside and out.

Also fitted to the ABT-fettled model is a new control unit for the suspension, allowing for electronic lowering of the standard air suspension. The brand’s ‘aero package’ also adds a new, more aggressive front skirt, rear diffuser, rear spoiler (yes, on a Q8), and the removal of chrome badging around the car for black components. ABT wheels of 22 and 23 inches are available in either matte black, a diamond-cut finish or gloss black with a polished rim flange. 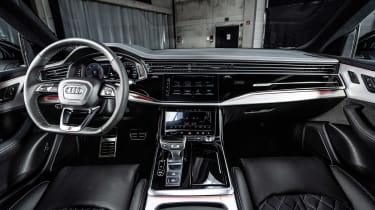 Performance numbers with the moderate boost in power in mind haven’t been quoted, but expect to see a slight improvement on the standard 6.3sec to 62mph and 144mph top speed figures. Although it’s certainly no Urus in 50 TDI form, when we got behind the wheel last year we were impressed by its comfort and refinement and agility considering its size.

If you’d like to stand out and just can’t wait for the reveal of the SQ8, perhaps the ABT Audi Q8 50 is the car for you. Pricing hasn’t been provided.