BMW’s hot small coupe a little too common for you? Meet Mulgari’s alternative 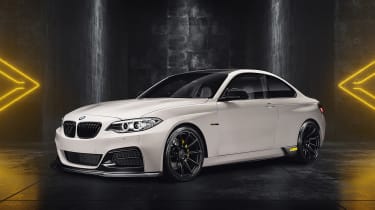 The BMW M2 Competition took the M-fettled 2-series to the next level, refining handling and adding the full-fat S55 six-cylinder engine into the equation. What it did lose was the wonderful sound of the N55 from the previous car, but Berkshire-based tuner Mulgari might have the solution…

Based on the B58-equipped M240i, the model produces 435lb ft of torque and ‘under 500bhp’ in order to retain driveability, according to Mulgari. No performance figures are quoted, but given that power far exceeds that of the current M2, the 0-62mph sprint should happen a little sooner than 4.2sec, with top speed coming in at over 155mph.

However, this is no simple tune-up, as the company has also worked on improving handling characteristics with widened track and tyre widths – front and rear tyres are now 255 and 275mm respectively. Improved stability, grip and aggression are benefits of such modifications, but they’re also good excuses for the use of a custom widebody kit. Mulgari claims certain design elements were taken from BMW icons of the past, including the dimpled carbonfibre roof of the E46 M3 CSL, and front wing cut-outs from the 3-litre CSL. 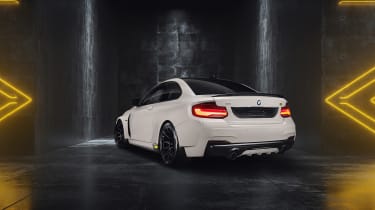 In order to further improve the driving experience, the tuner turned to the use of lightweight materials and motorsport-inspired design. A full-width front splitter aims to increase downforce, and carbon elements such as the aforementioned CSL-inspired roof help to keep weight to a minimum.

Inside, enlarged carbon paddles, Recaro bucket seats, a custom flat-bottom steering wheel and a rather bold interior design, complete with 3D-printed components, all aim to enhance the experience. An Akrapovič exhaust also replaces the standard system to allow the 3-litre six-cylinder to breathe, and although we’re not sure it’ll break any records, a Nürburgring lap time will be set in late July.

No pricing information has been revealed for the 25 units that will be built.