Toyota Supra: Next Supra could be a hybrid 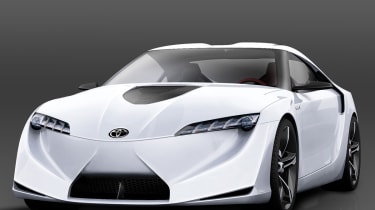 Officially billed purely as a concept car but rumoured to be a certainty for production, the Toyota FT-HS occupies a slot in the market once filled by the Supra but has 21st century credentials – namely a hybrid powertrain.

Designed and engineered in California, where such things carry considerable political, social and commercial clout, the FT-HS is powered by a combination of a 3.5-litre V6 and a version of Toyota’s Hybrid Synergy Drive electric motor system already employed in the Prius and Lexus RX400h. Between them the two propulsion units generate the equivalent of 400bhp, enough to sling the coupe’s lightweight body from rest to 60mph in less than 5.0sec.

Front-engined, rear-wheel-drive and with all its batteries sitting low on the floorpan to keep the centre of gravity low, the FT-HS is claimed to provide genuinely sporting dynamics.

With its carbon-Kevlar roof panel in place, the concept is (just about) a 2+2, but if you fancy driving alfresco then you have to ditch your passengers as the roof stows over the rear seats.