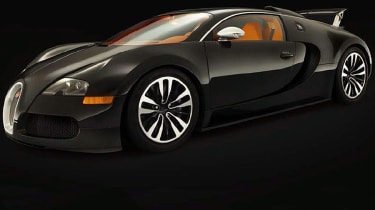 Sales of the Bugatti Veyron are fast closing in on the planned 300 total, boosted by a recent spate of limited editions. The first was the Pur Sang (meaning ‘pure blood’ or ‘thoroughbred’ in French), which was revealed at the Frankfurt motor show last September. Bugatti hosted a dinner for potential customers on the eve of the show’s press day and all five examples it planned to build were sold there and then.

That didn’t go down too well with other potential owners – especially those in the US – who couldn’t make it to the dinner, so another limited-edition model has been created called the Sang Noir (‘black blood’), which is being offered to the Americans first before European customers get the chance to put their names down.

Bugatti is launching the Sang Noir without the publicity that surrounded the Pur Sang, and accordingly it is not releasing any details of the car to the press. However, evo has discovered it will build just 15 examples, each featuring a special black finish that extends to the aluminium air intakes that rise above the roofline, giving the car a particularly mean apparance. There’s also more bare carbonfibre on show than on the standard Veyron, while inside there’s the option of a carbon-finish dash and a unique orange colour for the leather.