Glory for Aston and Andy Wallace, disappointment for Peugeot, Aston and Nigel Mansell 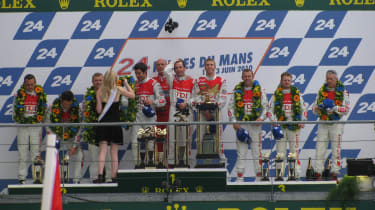 The 2010 Le Mans 24-hour race turned out to be something of a cracker. 56 cars started and 28 finished, with all four cars from the favourite to win, Peugeot, absent come the chequered flag after an abundance of problems. That was great news for Audi, though, who reclaimed the Le Mans title with a crushing one-two-three finish. The victorious R15 TDI polished off 397 laps – a new record – its quickest a 3min22.3sec. Leading the LMP2 class was Strakka Racing’s HPD ARX.01, which finished fifth overall, 30 laps off the pace of the lead Audi and its best lap 11sec slower. Andy Wallace’s LMP2 Lola placed eighth overall, 3rd in class, nine laps behind the Strakka. The GT1 class was won by a thunderous Saleen S7R, which proved to be tremendously reliable and which shook the pitlane on each of its 331 passes with the loudest noise on the grid. Four laps behind was Jerome Policand’s Corvette C6.R, the only other GT1 finisher after both Matech Ford GTs slipped out of the running alongside another C6.R and – of perhaps greater sadness – the Murcielago entered by the Japanese Lamborghini Owners Club. It hit problems but soldiered on through them all, at times over 150 laps off the pace, before retiring on Sunday. Not before passing the halfway mark and lighting up the wee small hours with spouts of flame on the overrun, though… Leader of the GT2 class was Marc Lieb’s Porsche 997 GT3 RSR, one of five 911s to finish from six that entered. Two Corvettes had provided a strong fight for class honours before dropping out, while other casualties included Jaguar’s return to Le Mans, the XKR RSR, and the BMW M3 GT2 Art Car driven by Brit Andy Priaulx. Giancarlo Fisichella also drove in this class, piloting a fourth-in-class and 16th-overall Ferrrari F430. Until the Peugeots hit problems, diesels were dominating proceedings once again, their exit allowing a petrol car – the Oreca of Team Oreca Matmut – to finish fourth. Aston’s 009 LMP1 Lola had clutched onto fourth place until less than an hour from the end, the car of Juan Barazi, Sam Hancock and Darren Turner succumbing to sad and unfortunate engine woes right at the death. Nigel Mansell’s Le Mans debut ended far sooner, though, the Beechdean Mansell Ginetta-Zytek due to be piloted by he and his sons knocked out after four laps, a slow puncture the apparent cause of an accident that saw Nigel dramatically lifted from the car, but with no injuries to report.