Because he's worth it

$1.5m a week for Porsche’s Wiedeking 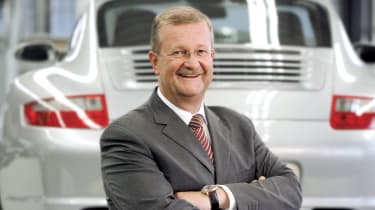 How much pay is a good – really good – motor industry manager worth? Is it a million dollars? A couple of million? The latter is roughly what General Motors chief Rick Wagoner is getting as he continues to try and turn the titanic (pun only half-intended) supertanker around.

Ask Wendelin Wiedeking, the hyper-active, caterpillar-moustached chief executive of Porsche the same question and he is likely to blush a bit, roll his eyes cheerfully around the room, drum fingers and whistle innocently while trying not to give a direct answer. Not surprising, really; because for every week he went to work last year, he pocketed well over $1.5m.

The size of the pay-out, a rather more sensitive issue in egalitarian Germany than in the shark-infested waters of Wall Street and the City, was enough to trigger a rant from German Chancellor Angela Merkel against corporate fat cats. But, just like those hoary ol’ l’Oreal ads, Wiedeking can lay claim to be worth it. Ridiculous as it sounds, Porsche made a pre-tax profit of 5.9bn Euros ($8.5bn) last year on sales of just 7.4bn Euros ($12bn), even though more of the money came from financial wheeler-dealing and share options than direct car-making. There have been big bonuses for both workers and shareholders.

Few see the gravy train slowing. Industry analysis group Global Insight sees Porsche’s sales passing through the 100,000 threshold to soar to 120,000 a year after the Panamera four-door comes in during 2009. When Wiedeking first arrived at Porsche 15 years ago, it was close to bankrupt.

However with Porsche poised to take a 50 per cent stake in Europe’s biggest car maker, the Volkswagen group, early in the New Year (it is already VW’s biggest shareholder), Wiedeking’s mettle faces sterner tests than most he has confronted at the luxury sports car maker. He will move on to VW’s supervisory board determined to lick VW into shape to fend off strengthening Asian competition. Time to place bets on the winner……