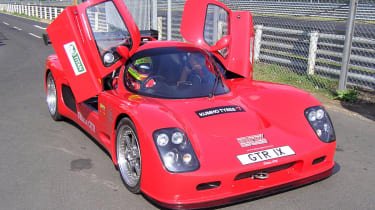 Ultima caused a stir last week when they arrived at the famous Nurburgring circuit to attempt a Nurburgring Road Car Lap Record in their 231mph Ultima GTR720.

The car, powered by a 720bhp Chevrolet V8 was aiming for a sub 7 minute lap (gulp...), which would put light years between its time and the next fastest lap of 7:27.82 achieved by the Zonda F Clubsport back in 2007.

Racing driver Tom Coronel, who was to make the attempt, said that the Ultima was “an absolute missile” and “a huge buzz to drive”. “I am confident I can set a new lap record”.

The Nurburgring had to be exclusively booked by Sport Auto Magazine in order for a traffic-free lap of the full 12.8 miles. The full length isn’t available to the public due to healthy and safety reasons.

However, Ultima arrived with thier GTR to find a very wet Nurburgring circuit, definitely not the dry one they were praying for. Richard Marlow, director of Ultima, said “It was gutting to have had the GPS timing gear all fitted to our Ultima GTR720 with the track booked exclusively for two half-hour sessions on Thursday 3rd July via Sport Auto Magazine, only for the track to be saturated by a torrential downpour, forcing us to abandon the actual lap record run.”

Booking the Nurburgring is both difficult and costly, and unfortunately there were no other sessions that Ultima could book this year. However, despite the company's disappointment with the weather, they managed to take a quick 220mph early morning detour along the de-restricted Autobahn on the way back!