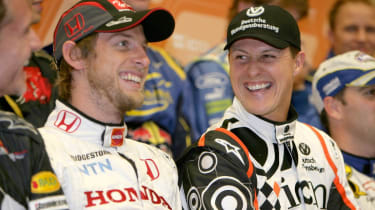 Michael Schumacher’s dramatic return to Formula 1 has been called off.

The seven-times world champion was due to step in and replace Felipe Massa after the Brazilian sustained head injuries after an accident in qualifying for the Hungarian grand prix.

Schumacher has backtracked though, after fears for his own health. He suffered injuries to his head and neck after a motorbike crash earlier in the year, and recent testing in a 2007 Ferrari F1 car in preparation for a comeback had aggravated these.

‘I am disappointed to the core,’ he said. ‘I am awfully sorry for the guys of Ferrari and for all the fans which crossed fingers for me. I can only repeat that I tried everything that was within my power. All I can do now is to keep my fingers crossed for the whole team for the coming races.’

Filling Massa’s shoes instead will be Luca Badoer, one of Ferrari’s most experienced test drivers and a former F1 driver. In his 56 grand prix starts, though, he didn’t amass any points. His appearance at the European GP in Valencia on August 23 is likely to be a fairly muted affair.