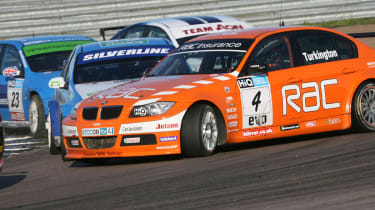 The end of the 2009 British Touring Cars season is just one round away after a dramatic ninth trio of races took place at Rockingham.

The sun was beating down as monster trucks, dirt bikes and a spitfire entertained the crowds, but all the real excitement was on track as the battle for this year’s drivers’ title nears its climax.

And it’s Team RAC’s Northern Irish driver Colin Turkington who remains the championship leader, but experienced Touring Car pilots Jason Plato and Fabrizio Giovanardi are breathing down his neck and still able to catch up.

It was Turkington’s teammate, Stephen Jelley, who grabbed the headlines at Rockingham, though. He triumphed in races one and three, picking up his first two BTCC wins and becoming the 2009 season’s eighth different race victor at the same time.

He finished ahead of Chevrolet drivers Plato (2nd) and Mat Jackson (3rd) in race one, the pair then moving up a place each to do a race two 1-2. Giovanardi completed the day’s second podium to make his move on Turkington’s title bid.

The Italian launched a verbal attack on Herbert afterwards – ‘I was clawing back the points in the first two races and in the third it was looking good, but then Herbert ruined it all. He’s a guest driver, he’s not involved in the championship, so I don’t know why he had to smash into me, many times. After that, my car was completely destroyed. It is frustrating when it happens like that, but when you lose out like that to unprofessional driving it makes it all the more difficult.’

Turkington had survived an altercation with Plato’s Lacetti to finish just outside the top three and go into the final three races at Brands Hatch with the BTCC championship his to lose – ‘For a moment in race three it looked like I’d be leaving Rockingham no longer the leader – it was a bit of a heart-in-mouth moment in the incident with Jason as the outcome could have been very different. But this time a bit of luck was with me while it was Jason’s and Fabrizio’s turn to suffer a bit of misfortune. So now this is it – just the final hurdle to clear but it’s a very high hurdle. Jason and Fabrizio are world class drivers so I’ll need to be at the top of my game to keep them where they are.’

October 4 2009 sees the BTCC season reach a doubtless dramatic climax, and you can bag yourself VIP tickets to attend. Click here to enter our competition.