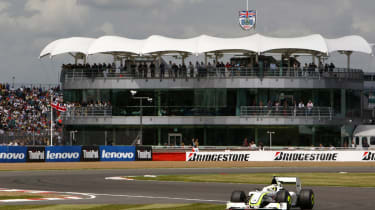 Silverstone is to continue hosting the British grand prix. The circuit has a 17-year deal starting from next season, 2010, ending Donington Park’s hopes of the race heading north. Donington had initially been given the race as part of a ten-year contract, ending 22 years of Silverstone GPs, with the East Midlands circuit planning a major overhaul that impressed F1 boss Bernie Ecclestone. However, financial hurdles led to the withdrawal of Donington’s rights and a question mark over the status of the British GP. Happily, today’s announcement confirms that Formula 1 will continue at Silverstone for the foreseeable future. Ecclestone said – ‘I am pleased that we have reached an agreement with Silverstone for the retention of the British Grand Prix. This will ensure that Great Britain will remain on the Formula One calendar for many years to come, which is something I have personally always wanted to see happen. The team at Silverstone already knows how to organise a good event, so now everyone can look forward to next summer at Silverstone.’ Silverstone will be redeveloped as part of its new agreement, with the lengthy contract ensuring the track has the security to justify pricey improvements. A clause in the deal allows both sides to cancel after ten years. This Wednesday sees the release of 2010’s F1 world championship calendar, with the British round taking place on Sunday July 11. That also happens to be the same day as the football World Cup final. What are your thoughts? Are you pleased Silverstone GPs will continue? Head to the Forum and let us know… Follow evo on Twitter for the latest fast car and motorsport news