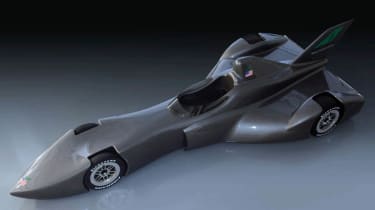 Imagine 33 of these of these incredible looking Delta Wings racing side-by-side at 230mph in the 2012 Indy 500 race. It’s so extreme and it seems almost impossible that it might happen, but it’s close to becoming a reality as the majority of the grid is backing this Ganassi-funded proposal.  The idea behind the concept is to reduce drag and improve safety, as with these cars aerobatics caused by inter-locking wheels would be a thing of the past. They would also be considerably cheaper to buy and run than the current machines, because the streamline bodies would only require 300bhp to get them to 230mph. Fit one with a 500bhp motor and 270mph would be possible.   Delta Wing isn’t the only one with a proposal on the table. Dallara have offered up three potential designs, two of which are more conventional, but one has similarities to the Delta Wing. Lola has put forward a plan that allows teams to choose from performance-balanced bodywork, while Swift has also now revealed its concept. It looks like something Batman might race. Whichever choice Indaycar makes, it’s sure to look amazing and a world away from Formula One. We’d choose the Delta Wing, what about you? Tell us your thoughts on the evo Forum.