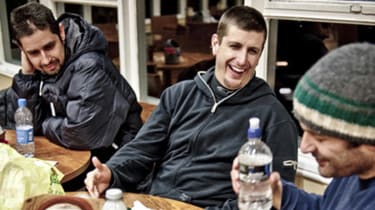 The man’s already a legend, but today Ken Block takes part in his first WRC event in Mexico. We caught up with him for his first ever test in Cumbria to chat Gymkhana and other stuff. As you’d expect, he’s our kind of chap.

For evo’s readers, the Gymkhana vids are already legendary. We’d been waiting for that type of content for ages, how do you go a step further with Gymkhana 3?

I wish I had an answer for that: been struggling with it for the past 6 months! When we started it was just something for fun. I have some amazing vehicles and I think they’re more capable than just being used on dirt. That original car was built for a guy to compete in, and when the car was done the guy quit doing the events so I had to do something with it, and we just went out and ended up making that video. I think most real car enthusiasts just love those clips. There’s that one of Markko Martin on rally GB where he comes down the hill and he’s almost backwards (it’s a great clip) and it’s stuff that like that I love to watch. I just wanted to go out and do that. And I direct it from a driver's stand-point: that’s the problem with the big ad agencies, they’re not car people.

How do think you’re approach to new media will impact on the WRC?

I think the whole package of what we’re bringing is different, it isn’t just new media it’s a new way of looking at motorsport; things have been done in the same stale way for so long. No one’s done anything really cool with a race team. Racing's the number one thing but we have to sell the concept and the lifestyle behind the team. If we do things right there’s gonna be more fans and more viewers.

Are we looking at Panizzi-style donuts on the final stage of every rally?

I only get to do that if I’m winning something. No pride in doing donuts in 6th place.

Agreed. Now, you’ve just driven a WRC car with your name on the side of it, do you just give up now, say you’ve ticked the box and go back to doing big skids in Subarus?

First up, there’s no more Subarus, it's Fords now!! Ah, you know today was just a blast. There’s nothing I enjoy more than abusing a car. Today was fun. I’ve had an amazing experience going from a rally school 6 years ago to driving a WRC car. I’d have never imagined it, I grew up watching Quattros in my teens. I mimicked that style of driving. Hell, I’ve been arrested for jumping my car!! It’s been an amazing ride, a fun experience.

Unfortunately for me I’m going into my first WRC event and I’ve only had one short day in the car and for half of that it was muddy and icy, so not a great way to prepare for stages in a hot desert in Mexico, but hey that’s life and I did the best I could today, and I’ll do the best that I can in Mexico.

You know, people are putting my name in the same sentences as Kimi Raikonnen because we’re in our rookie season together, it’s an incredible honour for me to even be on the same roads as all of these drivers, let alone a guy like Kimi.

But really, first stage at Mexico, this is about to get much more grown up - isn’t it?

Tough question. At a certain point the commitment level in the car and the speed becomes much more serious, but I thrive on that. Sometimes you get in the car and you’re battling for second place and it’s difficult. But when it’s flowing there’s nothing like it, you know today I think was the best day I’ve ever had in a rally car. That sounds stupid, but I’m now driving for Malcolm Wilson’s rally team, that’s some cool shit. I mean I’m a ******* lucky bastard to do this but I genuinely appreciate what’s happening for me. I’m doing this, I’ve got a Fiesta rally car for the US and I’ve got an insane 1000bhp car being made for the next Gymkhana film. I am a lucky bastard! And I prove things further by proving that I’m worthy of being a WRC driver.

Easy answer: Colin. I watched Walter Rohrl, Michelle Mouton when I was young, but when Colin came in, it made the sport for me. I was lucky enough to become a friend of Colin’s and he’s truly an inspiration.