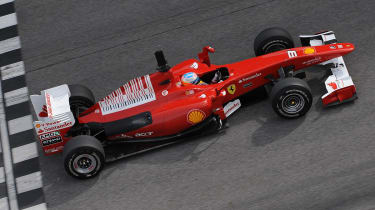 The season’s underway and we’ve now witnessed the first two practice sessions for this weekend’s opening Grand Prix in Bahrain. Question is what can we deduce from it?  Well, it maybe a new season but controversy is still never far away, and it’s McLaren who find themselves in the centre of a desert storm. They have developed a technique of stalling the rear wing, which involves their drivers moving their left legs on the straights to block a flap, thereby altering the airflow through the cockpit and onto the wing.  The rules are intended to stop teams stalling the rear wing (it reduces high speed drag and therefore allows the cars to run faster down the straights), and movable aerodynamic devices are most definitely illegal. Whether drivers legs can be classed as moveable aero devices is the main cause for consternation up and down the pitlane. It has been declared legal by the F1 technical bigwigs, but a protest by at least one rival team is likely. Renault’s Bob Bell is particularly unhappy and he told the BBC that “It is fundamentally clear the McLaren wing design is illegal," and continued the rant by saying "It is a complete joke. They have driven a cart horse through the sprit of the rules."

Click here to see where evo's money has gone at the bookies If this cheeky aero trick is not subsequently outlawed it will mean all the other teams will need to spend a huge amount of their 2010 on changing their cars, just as they did last season when the double diffuser appeared. Despite, McLaren didn’t finish the first day back at school at the top of class, that honour went to a German in a Mercedes. No, not that one, it was Rosberg who went fastest. He’s the only man in the top four teams to not yet won a GP and makes a habit of being fastest in practice. He did it regularly last year in the Williams and couldn’t help himself today. It’s very difficult to determine what these lap times mean as most of the running time was spent saw the cars running long runs to work out how tyre wear is going to effect performance through the race. The new regulations have created a hugely unpredictable start to the season and it all revolves around tyres and fuel. Refuelling is banned and therefore the cars will be 25 per cent heavier at the start of the race than they will be at the end, making the early laps vital to race strategy. Adding a further complication is the fact that cars making it to the top-ten Q3 qualifying run will have to start the race on the same set of tyres they used to set their best time. So you can go for a soft set and end up at the front, but the heavy fuel load at the start could destroy them in no time. That said, a gamble on an early safety car could pay massive dividends, and it’s a tactic that may be employed by middle order teams. Perhaps the only thing we do know is that only a fool would attempt to predict the winner of this one. My money’s on Button.

The evo team's been betting on the Formula 1 season opener. See where all our money's going here