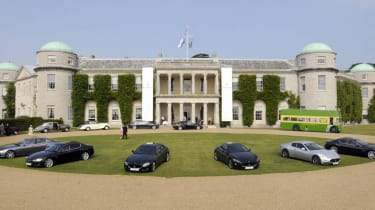 Goodwood announced today that the 2010 Festival would be opening for four, rather than three days this year because Thursday 1 July will see the launch of the Goodwood ‘Moving Motor show’ event.

The rest of the Festival will run as normal over Friday 2, Saturday 3 and Sunday 4 July, under the theme this year of ‘Viva Veloce!’ or ‘The passion for Speed’ but Goodwood’s new Motorshow area is sure to be a major Festival attraction.

Evo has done an exclusive interview with Lord March today, to discover exactly how this Motorshow will work but the basic idea is Thursday 1 July will offer car enthusiasts the opportunity to visit a Motorshow and actually drive some of the new cars at the show round a six mile course that includes the famous Goodwood hill climb. On the remaining 3 days of the Festival, the Goodwood Moving Motorshow area will return to being a static Motor show, as the Festival reverts to it’s more usual but still highly entertaining format.Keep checking www.evo.co.uk and see our exclusive videos from today’s Goodwood preview day event - including this awesome footage of trials legend Dougie Lampkin tearing around Goodwood House.