Where do the rich go shopping for cars? At the Top Marques show in Monaco. We report. 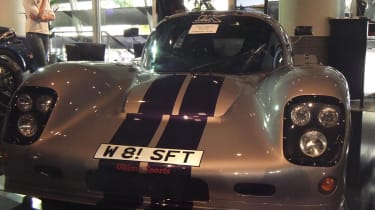 The Top Marques in Monaco is where the rich go to get their cars. Taste is often optional, but there are always a few things worth looking at (including, if you have a close look at the pics, a notable celebrity). Here's a quick run down of the highlights.

A new Russian manufacturer working with Virgin Formula 1 and Cosworth has two cars, the Marussia GT with a 3.5-litre transverse V6 producing 360bhp and 295 lbs/ft of torque through a sequential six speed transmission or six speed automatic with paddle shifter. They claim a top speed of over 160mph and a 0-62.5mph in 3.5 secs. The 2.8 has 10% more torque thanks to a turbo, but with no wing mirrors and less rear vision than an Exige,it's just as well it has a reversing camera.

Ultima showed the fabled twin-bike engined car. The nearer engine drives the front wheels. A modification that was accompanied by significant re-engineering to the front geometry. It's been something of a learning process for Z-cars. The original bike 60 amp alternators were not powerful enough for the car's electrics so they have been supplemented by a third 120amp unit. Cooling has been enhanced with a front radiator cooling a rear one which in turn cools what were once air-cooled engines! The car has been little-driven by its Spanish millionaire owner and few stats exist, but Z-cars is prepared to build you one for around £200,000.

The Pininfarina design based on a Rolls Royce is a one-off special project made in carbon fibre. Designed to evoke thoughts of the '30s and '40s, it's got a price tag of €3.75m and even in Monaco there was no queue.

The Fisker Karma uses the same turbocharged 2.0 engine as the Pontiac Solstice to generate power for its front and rear electric motors. It has an electric-only range of 50 miles and petrol range of over 300 miles. A full charge takes about six hours on a domestic supply or 20 minutes on an industrial one. Dealer delivery starts at the end of the year with production at Valmet (famed for making Porsches and AK47s) in Finland starting early next year. RHD follows in 2012 as will four-wheel drive. The current model uses low-mounted electric motors in the rear, and what looks like a transmission tunnel is actually a huge battery. The weight is "similar to a BMW 750" according to Fisker and it'll cost around £85,000. The solar panels in the sunroof produce half a kilowatt, and is more for running the aircon while parked than for providing motive power.

Atomik electric cars showed a heavily reworked Fiat 500 with many of the panels being replaced with carbon fibre and a new rear chassis that incorporates an aluminium axle. It boasts around 280bhp, drives through all four wheels and is capable of a sub-5 second 0-60mph despite weighing 1400kg.

Ruf is as proud of its new engine as it is of the car. It's just created it's own custom V8, a flat crank 4.5-litre developing 493bhp at 8500rpm and 369 lb/ft of torque at 5400 rpm. Since the engine has only just been installed in a yellow (of course) RGT-8, no performance figures are yet available.

Electric? Tick. Gullwing doors? Tick. Stupid price? Tick. The Quant has all the ingredients of a show car. This has the extra gimmick of the entire body being photovoltaic to provide 1.5kW of power to the cars four 150kW motors.  You'd have to leave it in the sun for months to charge it, so it's just as well you can plug it in. The four wheel drive car will apparently do 0-62mph in a mere 2.8 seconds. The forthcoming two wheel drive version will cost around £150k. This might be double that.