The wraps have been pulled off the full scale model of the British LSR car. News and full picture gallery. 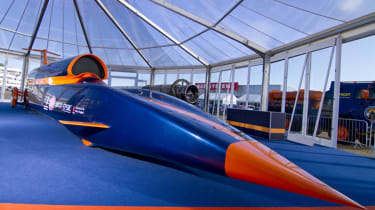 Bloodhound has taken the next step to reaching 1000mph. At the Farnborough International Airshow this week the team, led by Land Speed Record veterans Richard Noble and Andy Green, pulled the wraps off a 12.8 metre long 1:1 scale version of Bloodhound.

Rather than carbon fibre, aluminium and titanium, this one is made of polystyrene, and covered with fibreglass and resin. However, to make the 950kg model look suitably realistic, aerospace grade paint has been used to finish it.

Also at Farnborough the team announced major new sponsorship and partnership deals, unveiled a simulator that puts members of the public in Andy Green’s hot seat, and revealed that the Intel computer they’ve been running has given them more computing power than the Met Office… Better still for the development process, the actual Rolls Royce EJ200 jet engine Bloodhound will be using has successfully completed its tests. Together with the hybrid rocket, the 1500kg jet engine will give Bloodhound the equivalent of 135,000bhp.

Read about the aerodynamic difficulties the team had to overcome

Find out how to sponsor Bloodhound SSC