Find out the latest from our team on the ground in Paris. News and full photo gallery from the show floor 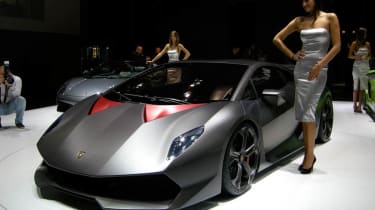 The Paris motor show is shaping up every bit as well as we'd hoped. It's a big place to get around - the cars are split between five halls - but everywhere you look there's something worth looking at. As you would expect, the French firms are all crowded around the main entrance in Hall One. Highlights? The Citroen DS4 isn't as interesting and ground-breaking as the DS3, but the Renault De Zir is properly bonkers, and the more you look at it, the better the Peugeot HR1 starts to look (provided you think a tall crossover 3dr hatch is acceptable in the first place).

But most of all this is a show about sport cars. OK, so the red gearbox casing gives the back end of the Lamborghini Sesto Elemento an unfortunate air of baboon's backside, but the rest of it is sensational - especially the stripped out interior. 999kg? I'm surprised it weighs that much. The Jaguar C-X75 rightly has hoards of people around it, too. No signs of the Lotuses yet - they don't appear until 4.45pm this afternoon, French time.

Besides whatever Hethel is showing this afternoon, the only genuine surprise has come from Audi, with the quattro Concept, which, as Henry mentionned in his piece has got us quite excited.

The show itself is upbeat so far, cash has clearly been splashed and there have even been some celebs spotted. Well, I caught a glimpse of Gordon Murray earlier. That doesn't quite beat our photographer Matt Vosper's claim to fame. He turfed Bryan Ferry out of his seat on the Eurostar yesterday...