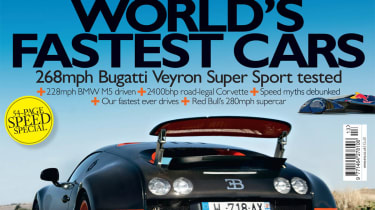 First DrivesThe Audi R8 GT, Lotus Evora S, BMW 1-series M Coupe and Subaru WRX STI are put through their paces LettersLotus needs to change, we need to stop driving Nissan Jukes and Chris Harris needs to man up On the cover - Bugatti Veyron Super SportThe world’s fastest supercar is the startling Bugatti Veyron Super Sport. But does 268mph and 1183bhp translate into a compliant and capable road car? Chris Harris and Harry Metcalfe spend a special day together to find out

Top speed stories - fact or fictionSupercar speed record stories always attract their naysayers. We split the truths from the myths

Audi RS5 v its rivalsIs the Audi RS5 made of the right stuff? Or is it bettered by the BMW M3, Mercedes C63 and Lexus IS-F? Road and track tests shall decide…

The KnowledgeEverything you want to know about performance cars. Unless it’s the Fiat Coupe Turbo

Ask the ExpertsIt’s a well-trodden question at Evo Towers: how do you turn an E36 M3 into a hardcore track weapon?