Zonda and police-spec Murcielago face off in video to support the release of Need for Speed: Hot Pursuit 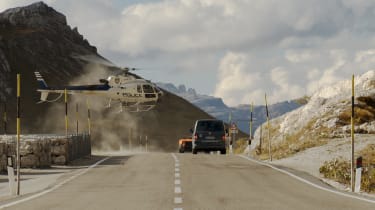 Shooting a video involving a chase sequence between a Pagani Zonda Cinque and a Lamborghini Murcielago Police car speeding through the amazing Passo di Falzarego, high up in the Italian Alps is always going to be spectacular and the final cut you can watch here certainly doesn’t disappoint. The Pagani Zonda Cinque used in this video was supplied directly from the Pagani factory and was driven by Marc Basseng, who recently lapped the Nurburgring in a record breaking 6 minutes 47seconds in the Zonda R. Driving the Murcielago Police car was the well known German GT1 driver, Marc Hennerici. The helicopter was only there for one day and once the shoot was completed all the editing was done in California by Electronic Arts after Runimation Studios had done the concept, screenplay and filming.

The actual filming took place in the first week of October and was done with the full assistance of the local Police, who closed the road while all the filming was being done. Evo used the same location in the Dolomites for the cover story in issue 82 when we pitched the Porsche Carrera GT against the Zonda F. Since then, Pagani have used this location for some of their promotional video too, as the scenery around this area of the Dolomites is truly spectacular.