2011's European Car of the Year is announced as the Nissan Leaf. evo's judge speaks 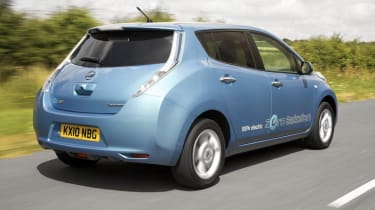 Car of the Year, the pan-European, 58-judge contest over which carmakers have quaked in their corporate boots since 1963, has delivered its winner for 2011. It's the Nissan Leaf. On the face of it, this is not a surprise. COTY should reward technical innovation, all the more so if it's usefully green in the way that new developments inevitably must be, and the Leaf certainly scores there. And it must be said that the other cars in the seven-strong shortlist aren't exactly landmark machines. No-one will look back at them in 20 years' time and celebrate their prescient significance and how they changed the world, even slightly. But it was hardly a resounding Leaf victory. COTY is as democratic as it can possibly be, the winning car simply the one that amasses the most points, so if a car is admired and disdained in equal measure, the opinions cancel each other out. Generally, the winner is the car that the greatest number of people like enough not to penalise it with a low score, which is why the capable but unexciting VW Polo won last year and the fine Skoda Yeti or intriguing Toyota iQ did not. But the Leaf is a polariser of opinion. That it won, amassing 257 points, is simply because there was nothing else that was consistently liked enough to overcome the Leaf's unusually low tally of maximum 10-point scores. (Each judge gets 25 points to spread between at least five cars, with no joint first places and a 10-point max.) Just three judges gave the full 10, compared with two for the third-place Vauxhall Meriva MPV (244 points) and none for the second-place Alfa Giulietta (248 points). But no cars scored more 10-pointers than the Nissan, either. Now look at the zero-points scores. The Alfa didn't get any, but the Leaf got nine of them – four of which were from Italy and four from Spain. Only the last-placed Dacia Duster (132 points) got more zeroes: 13 of them. So did the Italians get behind the Alfa instead? No. Its best scores were three of eight points, one score each from Austria, Greece and the Czech Republic. For the record, the other scores were 224 for the Ford C-Max, 175 for the Citroën C3/DS3 and 145 for the Volvo S60 and its V60 estate version. See a flaw there? The jury committee decided that the C3 and DS3 are the same car, even though in appearance, driving quality and purpose they clearly are not. Perhaps this helped assure a place in the shortlist which neither would have achieved on its own. The duo gained several strong scores, including from me, but whether its scorers had in mind the C3 or DS3 is unknown. In my case I thought DS3, and placed it second ahead of my joint-third scores for the Alfa and the Leaf. My winner? I went for the C-Max, awarding it eight points, because it manages to be both a useful MPV and a great driving machine. None of this year's other finalists is such a complete car. The Alfa was an early favourite of mine but in the end there are too many daft mistakes in its interior design. The dials' grey-on-black markings are near-impossible to read, especially when reflections hide them anyway, and the seatbelt obliterates the recline adjustment. The top Cloverleaf version manages to be less fun to drive than the admirable 1.4 MultiAir (more understeer, less agility, worse ride). And as for being able to see out of the back… I just couldn't mark the Leaf higher than I did. It wasn't even on my own shortlist. (Each judge nominates seven cars, and the final list is made up of the seven most-nominated.) It was absent because although it looks good, drives amazingly well and represents the most serious attempt yet at a purpose-designed, mainstream electric car, it can't do the job a car should do because it glides to a halt after 100 miles. And then it can't go again until it has been recharged. It's also very expensive without the current £5K subsidy, which won't last for ever. Other cars which weren't on my shortlist were the Meriva (all doors and no driving delight), the Volvo (nothing outstanding here at all) and the Dacia Duster (cleverly designed to be remarkably good for something so cheap, but old in technology and hardly a Car of the Year). So my hit-rate was just three out of seven. My four that got away were the Jaguar XJ (it should have won, given the opposition, but it's against today's austerity mood), the Peugeot RCZ, the Nissan Juke and – a wildcard, this – the Saab 9-5. Let me tell you about the 9-5. It felt good on the press launch in Sweden, but has been almost universally panned here on the basis of the UK-market road test cars. The combination of a lumpy, agitated ride and an overall wooden-ness of feel are the chief reasons, although some have disliked the cabin's pervading blackness. Saab GB made the disastrous mistake of specifying its press cars with Sport suspension, big wheels and ultra-low-profile tyres, and this was the result. Stung by the criticism, Saab converted one car to non-Sport spec. I tried this car on disintegrating UK roads and it was brilliant: crisp but fluent, agile well beyond its size, an unexpectedly capable cross-country weapon. This was the car I had in mind when I said on the launch that I'd rather have one than a new 5-series or an A6, and it was a relief not to have to change that view. It deserved its place on my shortlist, being rather more engaging than the Volvo. Sadly, perhaps because some judges hadn't experienced the Saab in the correct form, too few others agreed with me.