Details of 2011's Cholmondeley Pageant of Power revealed, the 'Goodwood of the North' 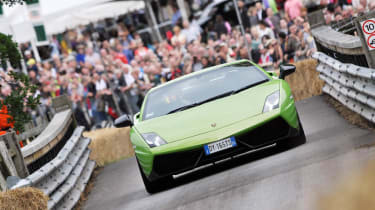 The 2011 Cholmondeley Pageant of Power will be a three-day event. ‘The northern Goodwood’ takes place July 15 to July 17 2011, and the Cheshire event gets an extra day for the first time, with a preview Friday that will allow visitors behind the scenes access to the cars and drivers as they practice for competitive action during the weekend. Much like Goodwood, the event boasts a vast array of performance and racing cars and bikes, classic and modern, while helicopters, aerobatics, military combat displays, powerboats and hovercrafts also appear. If you’re similar to us, and like just about anything with an engine, you’re in luck. A full event schedule will be announced in the near future, but some details have already been revealed – the 40th anniversary of Tyrrell’s first F1 world championship will be celebrated via high-speed runs of Cholmondeley’s 1.2-mile sprint track while the world’s only collection of four-wheel-drive Formula 1 cars will be present. Away from motorsport, a breathtaking battle simulation is promised, with a British Army display starring tanks, troops and field artillery. There will also be a World War II fighter-plane flypast and a huge helicopter gathering will be taking to the skies. The 2010 Pageant attracted 50,000 visitors, winning ‘Best Tourist Event in Cheshire’. Despite its success, adult tickets for 2011 are set to cost from just £15. Click here for the official event website. See our huge 2010 Goodwood Festival of Speed gallery