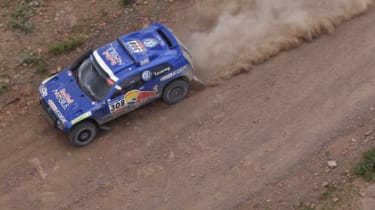 The 2011 Dakar is now underway and I thought I would try and give you some updates on this amazing race over the next fortnight. The favourites for the overall T1 prototype class have to be the four crews in the Volkswagen Race 3 Touaregs (you can read about my drive in one in the current 153 issue of evo) and principal among them is the 2010 winner Carlos Sainz. The main challenge to VW will likely come from Stephane Peterhansel in his BMW X3, but others to watch out for include Chicherit Guerlain in his Mini Countryman and Robby Gordon in his Hummer H3. Mitsubishi meanwhile are the favourites in the T2 production car class.

The ceremonial start in Buenos Aires…

…was followed by a 788km stage the next day with 222km of special stage which was mostly fast gravel tracks and so suited to those with WRC experience. As such, it was no surprise to find Sainz in the lead. The Mini was already looking fragile though…

Day two, with 324km of SS through agricultural landscape from Cordoba to San Miguel, was more of the same with the fast stages seeing Nasser Al-Attiyah coming in second behind Sainz. It wasn’t all plain sialing for VW, however, as Mark Miller had a big crash in his Touareg.

Social Provider
YouTube
Social Embed
https://youtu.be/csb-JSIVA0c
Check back here for more updates on how the rally is progressing
Follow us on TwitterFollow us on FacebookEmail us