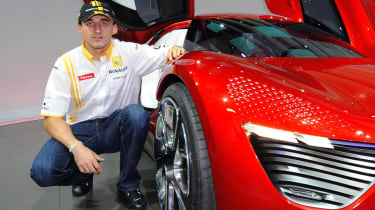 Serious doubt has been cast on Robert Kubica’s 2011 F1 season, following a high-speed crash on Sunday whilst competing in Italy’s Rally de Andora at the wheel of a Skoda Fabia S2000 car. The Polish driver was airlifted to Santa Corona Hospital yesterday and is said to have suffered multiple fractures of his right arm, leg and hand. Kubica, who drives for the Lotus Renault GP team, was due to test at Jerez later this week. According to a statement from his team, he also suffered severe cuts to his forearm, and spent seven hours in surgery whilst a team of specialists worked to save his right arm functions. Following the surgery, the lead surgeon commented that the operation was successful, but it will take around six days to check if the circulation in his right hand is functioning correctly. Eric Bouillier, team principal of Lotus Renault GP said of Kubica’s accident, ‘the news of Robert’s accident came as a real shock to the whole team. All of us, at Lotus Renault GP wish him a quick recovery. I will be travelling to Italy tomorrow, along with Vitaly Petrov, in order to see Robert and tell him that we are impatiently waiting for his return.’ The team boss also remarked that it was too early to be thinking of a replacement driver. However, given a potential recovery time of 12 months, a decision will have to be made soon, given we are less than five weeks away from the first race in Bahrain. The chances are that Bruno Senna (rather than Lotus Renault’s other third driver, Roman Grosjean) will take Kubica’s 2011 seat. Kubica made his F1 debut for BMW-Sauber in 2006 following a climb through the ranks of karting, Formula Renault and the Renault World Series. He joined Renault GP last year, securing three podium finishes, including a second place in Melbourne. Ending the season on 136 points to bag eighth place in the drivers’ championship, he was due to race alongside Russian driver Vitaly Petrov. The 26 year-old Pole holds the number one seat at Lotus Renault GP, who recently unveiled its retro JPS livery for the 2011 car.