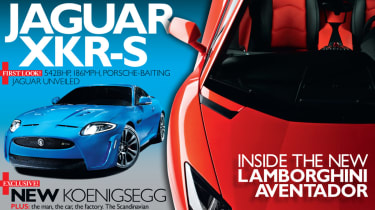 Buy a copy of evo 155 in our online shop

NewsAll the news from the Geneva motor show, up close with the new Koenigsegg Agera R, and Porsche’s engine plans

LettersThe WRC should be for rear-drive supercars, and Harris’s Campaign for Real Oversteer (CAMRO) gains momentum

Aventador: the new Lambo supercarThe wizards of Sant’Agata reveal their new V12 creation. Called the Aventador, it’s named after a Spanish fighting bull, and a fittingly beefy one to bootMcLaren MP4-12CHow good? It rewrites the rules, just like the F1 did. How desirable? Hmm, that’s not so emphatic, says Chris Harris, after his third encounter

Jaguar XKR-SIt’s the most potent XKR ever, built to celebrate the 50th anniversary of the iconic E-type. Speaking of which…E-type to GenevaPeter Tomalin recreates the eleventh-hour dash to get an E-type from Coventry to the Geneva motor show in 1961Coupe group test: RCZ v TT v SciroccoCan the stylish Peugeot steal the limelight from the Audi and VW? Richard Meaden decides

Long-term testsFarewell, then, TT RS and GT-R; there’ll be far fewer capital letters in the car park without you

Buying guide: Honda S2000 You can’t go far wrong with one of these, but read this first to make sure you buy the best

The KnowledgeEvery fast car figure you could possibly needMe and My Car: Toby Barlow and his Defender Td5Check out this bloke and his Td5 Defender; he might be at your next trackday…

Buy a copy of evo 155 in our online shop