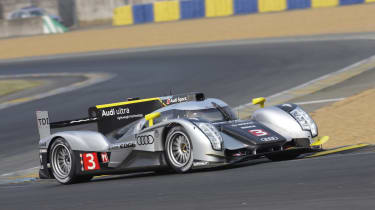 Audi’s Tom Kristensen set the fastest time at Le Mans during the weekend’s test session, setting a time of 3min 27.687sec in the new R18 TDI. Audi appeared to dominate the test session with three of their cars in the top four places, however, Peugeot were incredibly close with Stephane Sarrazin’s 908 HID ending up in third place, just 0.2 seconds behind the fastest Audi.

The highest top speed went to Franck Montagny with 211.6mph. Of course it was test session not a qualifying session and all the Peugeots and Audis were keen to put in as many miles as possible. The three Audis covered a total of 2024miles while the three Peugeots covered slighty more with 2117miles completed. The Audi drivers were particularly impressed with how easy and comfortable the new closed cockpit R18 was to drive.

Sadly the two new Aston Martin AMR-ONEs  could only manage 12 laps between them due to engine problems. The highest placed petrol engine car was the Pescarolo-Judd of Emmanuel Collard who lapped the circuit in 3min 36.583sec – some nine seconds off the pace of the diesels…

The LMP2 category was dominated by Nissan-powered cars with Franck Mailleux’s Signatech Oreca-Nissan ending up on top. The Farnbacher Ferrari 458 driven by Allan Simonsen was the fastest in the GTE Pro category (formerly GT2), just dipping below the four-minute mark, however the BMWs and Porsches were hot its heels.

All in all, it was great to see the test day back again and with seven weeks to go away and improve before the race itself, it must surely have been of huge use to the teams. It certainly looks like it’s going to be a great scrap when they go twice round the clock on 11th/12th June.