After Matt Neal takes out his team-mate in Race 2, the championship standings are closer than ever. Report and gallery here 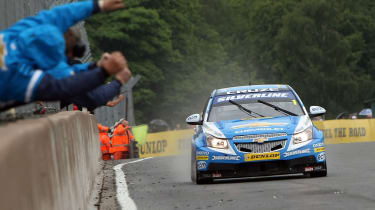 Qualifying in first and second, the turbocharged Civics of Matt Neal and Gordon Shedden looked very strong this weekend. Neal entered Oulton Park with a twelve-point advantage in the championship, but following a race-ending collision with his team-mate during Race 2, he leaves this round with a significantly reduced advantage of just two-points. Shedden, Jason Plato and Mat Jackson all took wins at this mixed weather and highly demanding race weekend.

Gordon Shedden took the win in Race 1 for Honda, utilising a clever strategy of wet tyres on rear, with slicks up front. This proved to be a considerable disadvantage at start of the race, but as the track dried, lap times tumbled and Shedden's strategy really paid off. Neal, who started on full wets, took the early lead, but as the wet track started to dry, he fell back with the rest of the field. Jason Plato and team-mate Alex MacDowall took second and third. After pitting, Neal dropped down to eighth place.

Race 2 looked like it was in the bag for Shedden, who had lead from the beginning, but following a safety car period, Neal managed to make up some places from eighth, and started challenging the sister Civic for the lead. When entering the final corner, Neal made a move down the inside, making contact. This ended very badly, the greasy track making things worse. Both cars careered into the gravel trap, leaving the door wide open for Jason Plato to take the win. Shedden managed to return to the track, crossing the line for sixth place, leaving Neal behind, beached in the gravel.

Mat Jackson, in the Airwaves Ford Focus, was at the front for the start of Race 3, but found he had been overtaken off the line by rookie Nick Foster in the WSR BMW. Jackson regained the lead after Foster left the track just three corners later. He lead the race from that point on, followed closley by Shedden. Andrew Jordan brought the Pirtek Vauxhall Vecra in third, with Neal in fourth pushing hard.

Following the incident in Race 2, Neal said: 'I’ve no idea how I’m still in front. Today has been a bit of a shocker and Gordon would have been quite justified in taking a swipe at me after race two – it was a dumb move on my part. But everyone else has tripped up somewhere along the line today so I’m a bit lucky.'

Shedden added: 'The incident with Matt was just one of those things – there’s no way he intended for that outcome so there’s no point jumping up and down about it. I still managed to keep going and get across the line in sixth and took another good points haul in race three. I’m right back in the title hunt which is the most important thing.'

Neal (103) still leads the championship, but his lead had all but disappeared. Team-mate Shedden (101) trails by just two points, with Mat Jackson (96) five points behind him. James Nash (95) and Jason Plato (91) are so close that Neal has it all to lose in Round 5. Race 5 will be held at Croft on 19 June. For more detailed race results and championship standings, visit www.btcc.net.