A 'Cadillac Pink' Zonda C12 Roadster is being sold by Bonham's at the Goodwood Festival of Speed, estimated to make between £200K and £250K 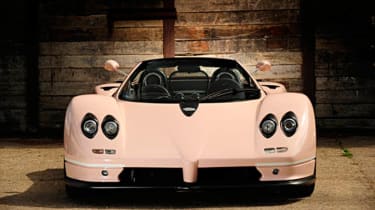 A bright pink Pagani Zonda C12 Roadster is set to be the star of Bonham’s auction at the forthcoming Goodwood Festival of Speed.

The one-owner Zonda Roadster is estimated to make between £200K and £250K when it goes under the hammer on July 1st – and that’s despite a paint scheme described in the brochure as being ‘Elvis Presley Cadillac Pink’. The car was originally built in 2004, but went back to the factory in 2007 where it received a four-month overall that included a complete overall of its 7.3-litre engine and a new ECU. Power is now claimed to be 602bhp, translating into a 3.6-second 0-60mph time and a 214mph top speed. The car also received a leather dashboard, carbon engine cover and a rear diffuser.

If the quarter million estimate seems a bit steep there are plenty of cheaper alternatives among the other lots. Our eyes were drawn to a 1986 Lancia Delta S4 'Stradale' with just 2100km from new and estimated to make between £80K and £100K. If that's still out of range, cheaper entries include a very tasty-looking 1974 Capri RS3100 - complete with period ‘door stop’ boot spoiler – which is estimated to make between £20,000 and £25,000.

You can check out the full auction catalogue here.