A strong weekend for championship leader Matt Neal, as well as a surprising show of speed from a pair of WSR BMWs. Report and gallery here. 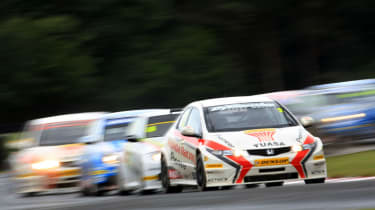 Championship leader Matt Neal took the first two wins of the day in the turbocharged Honda Civic, with championship hopeful Mat Neal – currently second in the championship – picking up the third win of the day in the Airwaves Racing Ford Focus. Both of the WSR BMW 3-series picked up a good selection of podium positions, fighting hard throughout the weekend, just missing out on a win.

Reigning Champion Jason Plato was on pole for the start of the first race in his Silverline Chevrolet Cruz, but following a first-corner incident, his hopes of a win were crushed. Neal took the lead and managed to stay at the front all the way to the chequered flag. Mat Jackson and Robert Collard were pushing him all the way, but couldn't quite live with the outright pace of the Civic.

Starting from the front, Neal had the maximum ballast penalty of 45kg in race 2, yet he still managed to hold his own at the front, preventing the BMW of Collard from passing. He was much closer this time, pushing hard for the win, but Neal kept his cool throughout the rest of the race. Mat Jackson took the win in race 3, closely followed by the impressively quick pair of BMWs, driven by rookie Nick Foster and team mate Robert Collard, who had also been competative in the previous two races.

Extremely happy about the way the weekend unfolded, Neal commented: 'I thought we could get a podium or two here but two wins is a dream come true. Seventh in race three means more points and they are very important – that lad Jackson is putting up a real fight and we would be very naïve to underestimate him in the second half of the season.'

Matt Neal (140) has undoubtedly had a great race-weekend, solidifying his championship lead, now ahead of closest rival Mat Jackson (131) by nine points. Team-mate Shedden (120) has dropped back to third, with Andrew Jordan (111) fourth in the standings. James Nash (104) and Jason Plato (100) stay within sight of the championship, and with another five rounds to go, nothing is certain in the world of BTCC. Round 6 will be held at Snetterton on Croft on 07 August. For more detailed race results and championship standings, visit www.btcc.net.