We've spent all day following the action at the Goodwood Festival of Speed, with evo drivers taking to the track alongside racing superstars 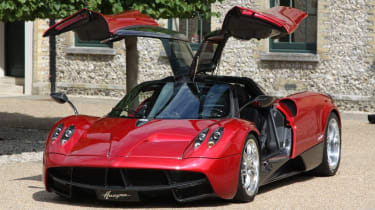 See the pictures from Saturday at the Festival

And read our report on the Morgan 3 Wheeler, which made its debut at Goodwood.

It's long since become a regular fixture in the motorsports calendar, but the Goodwood Festival of Speed is still able to spring a few surprises on the tens of thousands of fans who flock here every year for their fix of racing action.

And, to judge from Friday, 2011 is no exception. This year's theme is 'Racing Revolutions', meaning that some of the most radical cars to ever wear a pair of door numbers have been brought together to run up the driveway of Lord March's Sussex estate. Many have been to Goodwood before over the years, but it's still impossible not to rate an event that can place the Chaparral 'Sucker Car' - the 1970 CanAm racer that uses a separate engine to create massive downforce - right next to the still-dirty Aston Martin Zagato race car that competed in last week's event.

As always, variety is the essence of Goodwood, with everything from pre-war Grand Prix racers to modern F1 cars via group B rally machinery, decades of touring cars, squillion-dollar classic racers and - to celebrate the 100th anniversary of the Indy 500 - a collection of US racers unparalleled on this side of the Atlantic. Plus, of course, the latest and greatest supercars, whose manufacturers increasingly see Goodwood as being the best place to sell their wares.

evo's Roger Green, Chris Harris and Richard Meaden were all in action, driving a wide variety of cars, and we'll bring you their reports soon. But in the meantime, check out of picture gallery of Friday's action.